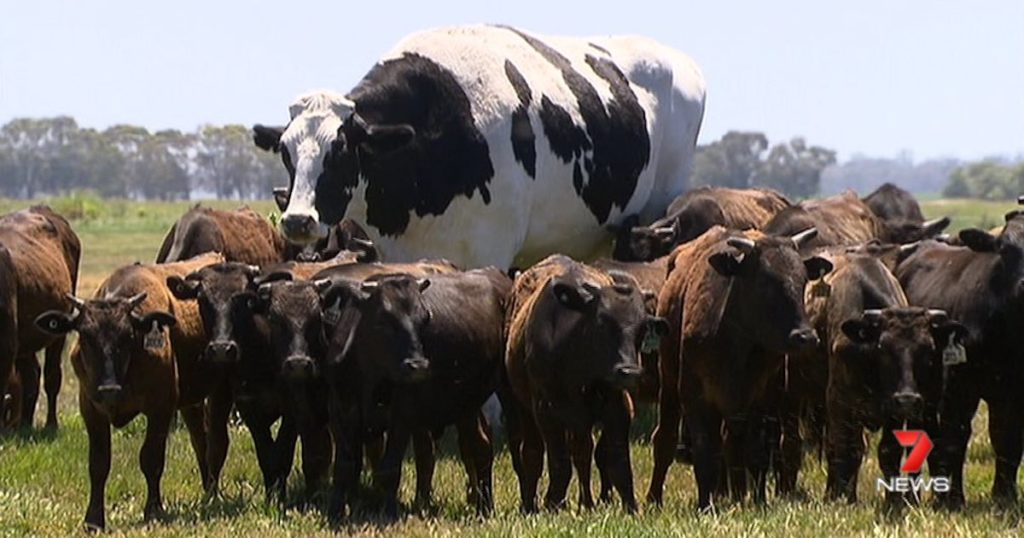 When you’re caught in the never-ending nightmare that is the 2018 news cycle sometimes you just need something to distract you from conflict and corruption, something to take you away to a fantasy world full of whimsy and joy.

Sometimes that thing is a big effin’ cow.

Knickers, a Holstein Friesian steer, is a bovine behemoth that sticks out from the herd. #7News pic.twitter.com/oazuaW0SWj

To be more specific this gentle giant is a Holstein Friesian steer who resides in Australia and who, at 6’4″ and 1.4 tons, is being heralded as the biggest steer in the world as well as an “absolute unit.”

I mean look at that thing.

The beleaguered members of the internet let out a collective groan of pleasure and relief upon witnessing the great beast, whose name is “Knickers”, and of course they were quick with the jokes and memes.

Here are some of the best ones so you don’t have to google “knickers” and wind up on some kinky British dating site.

How I feel when I walk into any party pic.twitter.com/W9sshtcnIQ

This is the ideal male body. You may not like it, but this is what peak performance looks like… pic.twitter.com/qGGszwAmxu

My entire middle school experience in one photo pic.twitter.com/hW9DmRaEut

good morning to only big cow and nobody else pic.twitter.com/AzcCakbDZM

me: my mans over there thinks you’re cute

them: Where he at?

My problems versus everyone else’s pic.twitter.com/tQl11351Kd

Me still trying to shop at Forever 21 pic.twitter.com/Cc60PVKfxq

I want to milk the big cow

every so often you come across a story that makes you think “damn, that’s a big cow”.

to me, this is one of those stories. https://t.co/KOz6PqoG0Z

The kicker for Knickers is that his tremendous size, and most likely his global fame, means that he won’t be going to the slaughterhouse but will live out his huge, natural life in peace. Which is happy news for big cows and big cow lovers alike.

“Knickers was too big to be put through a meat-processing facility and so will spend the rest of his days peacefully eating and lowing and issuing tremendous and unfathomably powerful farts alongside its much smaller peers.” https://t.co/pTOm9Hj1h6

People: “If only there were some good news sometimes.”
The internet: “Here’s a really big cow.”
People: “Close enough for now.”

Of course, The Washington Post had to go and be ‘That Guy’ who reminded everyone that Knickers isn’t a cow, he’s a steer. So, people had fun with that too.

— pixelated no longer too early for a christmas name (@pixelatedboat) November 28, 2018

What a great respite from the constant calamity we live in.