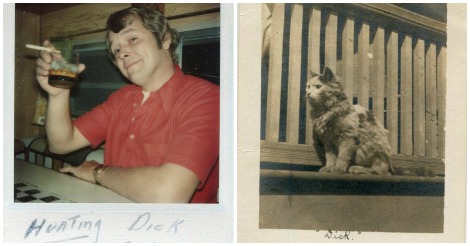 Stacy Waldman collects Dicks–vintage photos of people, places and things named Dick. As she told our friends at Flashbak, “I put them into categories. For example, ‘Big Dicks’ are adult men named Dick. ‘Little Dicks’ are boys named Dick. ‘Dick Destinations’ are places named Dick, and ‘Friends Play with Dick’ refers to photos of Dick and his friends. You get the idea. Recently, I added photos of Richards and put them into the category ‘Don’t call me Dick!’ I’m hoping to gather 365 photos of Dicks so that I can eventually have a desk calendar called ‘365 Days of Dick’. I have about 300 photos, so I’m getting close.”

Everyone needs a hobby, Stacy. Here’s hoping you find as many Dicks as you could ever want!

Check out Stacy’s Facebook page, House of Mirth, for more Dicks than you can shake a…stick at.

2. Some Cats Are Dicks