20+ Shower Thoughts That Will Never Leave You 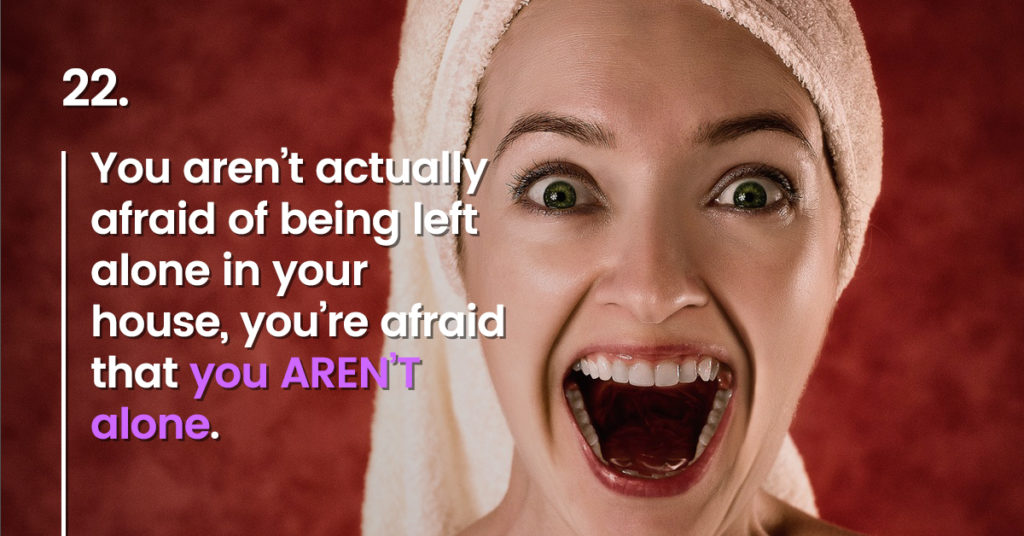 There’s something about lathering up your head and massaging your skull that really gets the ideas flowing. In the shower, we can take a break from doing anything besides washing our filthy bodies. At this point, I can do that pretty much on autopilot, which means my brain has a lot of extra time to come up with the weird stuff. It’s a forced time out, and it’s great. In the shower, your mind can explore. It always comes to some interesting conclusions.

There’s a whole subreddit devoted to these conclusions, partly because a lot of them really hold up. Unlike thoughts you have when you’re drunk or high, Shower Thoughts stay true. Towel off, get dressed, go about your day—shower thoughts stay with you. Here are some of the best ones from Reddit for you to ponder during your next scrub down. Who knows what they’ll inspire.

22. You aren’t actually afraid of being left alone in your house, or in the forest; You’re afraid that you AREN’T alone.

21. If phones warned that listening at a high volume may cause damage to headphones instead of hearing, more people would probably keep their volume lower.

20. Cops saying “if you lawyer up, you look guilty” is like saying ” if you wear your seatbelt, you look like your going to get in a car accident”

19. It’d be horrifying if babies could scream from inside the womb instead of just wiggle and kick.

18. If you woke up with the ability to walk through walls, it would probably take a decent amount of time before you realize you suddenly had that power.

17. Anxiety is like when video game combat music is playing but you can’t find any enemies.

16. It kinda makes sense that the target audience for fidget spinners lost interest in them so quickly.

15. Security at every level of an airport is absolutely ridiculous. Until you get to the baggage claim. Then it’s just like take whatever bag you want.

14. Watching a graduation ceremony is like sitting through a movie that’s entirely end credits.

13. There is no physical evidence to say that today is Wednesday, we all just have to trust that someone has kept count since the first one ever.

12. Your future self is talking shit about you.

11. The first person who inhaled helium must have been so relieved when the effects wore off.

10. If wookies have a 400 year life span, then Han Solo is basically like Chewbacca’s third dog.

9. It would be weird if a human yelled out “Anyone wanna f*ck?” but birds do it all day and nobody cares.

8. If race horses could comprehend that victory meant a lifetime of leisure and sex they’d probably run even faster.

7. If you’re no longer covered by your parent’s health insurance, your manufacturer’s warranty is over.

6. Sleeping in is considered lazy, but going to bed early is not.

5. You know you’ve reached adulthood when your bed is in the middle of the wall instead of in the corner.

4. A different version of you exists in the minds of everyone who knows you.

3. The only part of your reflection you can lick is your tongue.

2. When you introduce two different groups of friends to each other, it’s like your own life’s crossover episode.

1. It’s weird to think that nighttime is the natural state of the universe, and that daytime is only caused by a nearby, radiating ball of flame

You can never un-think these thoughts. And you’ll never want to.