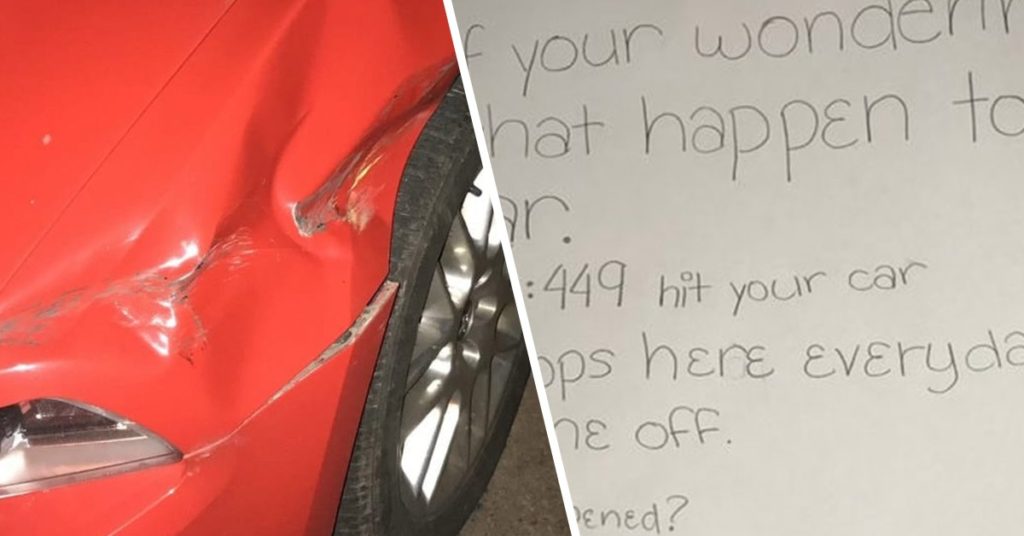 After a school bus driver hit a car and fled the scene, a sixth-grader who witnessed the incident let the owner know.

Canisius College senior Andrew Sipowicz said he went out to his car on Monday evening to find that the driver’s side of his 2012 red Ford Mustang had been badly damaged.

But he also found a note detailing the event. The note, signed by a “6th grader at Houghton Academy,” let Sipowicz know that it was a Buffalo public school bus driver who hit his car.

“She was trying to pull off and hit the car,” it reads. “She hit and run. … She made a dent and I saw what happened.”

The anonymous sixth-grader, who seemingly lives close to Sipowicz  wrote “sorry” and included a drawing of the bus in the note.

Sipowicz shared photos of his dented car and the note on Twitter the following day. The tweet garnered over 1.2 million likes, 268,000 retweets, and over 4,400 comments in less than one week’s time.

“Shoutout to the anonymous 6th grader for saving me a couple thousand (Bus not drawn to scale),” wrote Sipowicz.

Shoutout to the anonymous 6th grader for saving me a couple thousand (Bus not drawn to scale) pic.twitter.com/7aNK10xSwX

Sipowicz told USA Today, “My first thought was thank God for the note because without the note I wouldn’t have any idea of what happened.” He added that upon reading the note his “mood went from angered to more relaxed.”

“The detail of having two kids in the back of the bus yelling still makes me laugh when I look at it now,” he said.

People were impressed with the anonymous middle-schooler’s drawing skills.

Many commented on the fact that her future appears to be bright.

This kid has a future in insurance lmao

I see many good things coming from that child in the future! Exceptional kid, kudos to whomever is raising him! ??

While others joked that she was taking revenge on the bus driver.

“That’s for not ever letting me put my window down” pic.twitter.com/RvlSAH0ZlE

And I would’ve gotten away with it too, if it weren’t for you meddling kids pic.twitter.com/G9ZTZtfYKS

According to BuzzFeed News, First Student—the company that owns the buses and employs the drivers—said they had met with Sipowicz and promised “to cover the full cost of the repair.”

“The actions of our former driver are completely contrary to First Student’s training and what we stand for as a company,” said the company. “We have initiated the process to terminate the driver.”

Sipowicz said a teacher from the student’s school reached out to him after recognizing the handwriting on the note.

Kevin Garcia, vice principal of Buffalo PS 69 Houghton Academy, told CNN affiliate WKBW that the school plans to celebrate the student’s “outstanding leadership” by presenting her with a citizenship award.

Update: The student who wrote the letter has been found and we’re in the process of finding a way to reward her for her actions. Very grateful for what she did