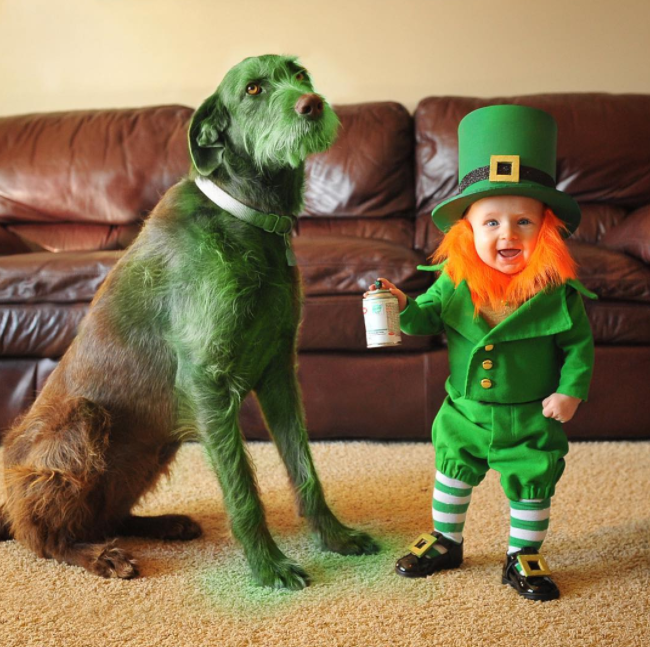 Alex Lawrence is both a father of six and an art director/web designer/photographer, and he’s known for incorporating his family into his art projects at his website, That Dad Blog. For St. Patrick’s Day last year, Alex used his then-six-month-old son Rockwell to create a series of hilarious “mischievous Leprechaun photos.”

Alex came up with the initial idea but the whole family pitched in to make it happen. Initially, he held up his son (who’s tricked out in an exquisitely detailed leprechaun costume) for the desired pose, then edits and touches up the images in Photoshop. The end result looks good enough to seem real, and they’ll definitely get you into the holiday spirit. Sláinte!

1. “We just sat down to breakfast when the doorbell rang. Apparently he wanted to make an official entrance as a leprechaun. Im not sure if the beard is real, every time I try to touch it he kicks me in the shins. Looks like it’s time to start sleeping with one eye open again.”

2. “I’m going to need his pot of gold to pay someone to remove this paint!”

3. “Tonight he ‘surprised’ me by modifying my Air Jordan’s! He said the improvement would help me ‘bring my A-game.'”

4. “When I opened the door he told me to calm down because he had already run one load with green paint and it turned out fine.”