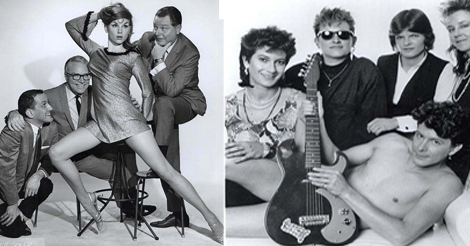 Back in ancient times, (1970’s-80’s), music promotion was simple: bands would hit the photography studio for some publicity photos, and then when that band would travel to a new city for a gig, those photos would be published in newspapers and magazines or made into posters for the venue. The idea was, potential concert-goers would look at these photos and think, “Hey, these people look charismatic and interesting. I bet it would be fun to watch them go up on a stage and perform in front of a crowd.”

It should come as no surprise to you that plenty of times the finished product didn’t live up to the original idea. If there’s one thing we know here at AFP, it’s that 99.9% of the human population looks uncomfortable on camera. And that includes musicians.

Thanks to our always-amazing friends at Flashbak, who spent countless hours scouring the Internet to find these gems, we bring you this gallery of awkward band publicity photos.

14. The Premiers, featuring Artie and Lynda

17. Homework (their original name was, “How do we get teenagers to never buy our albums, ever?”