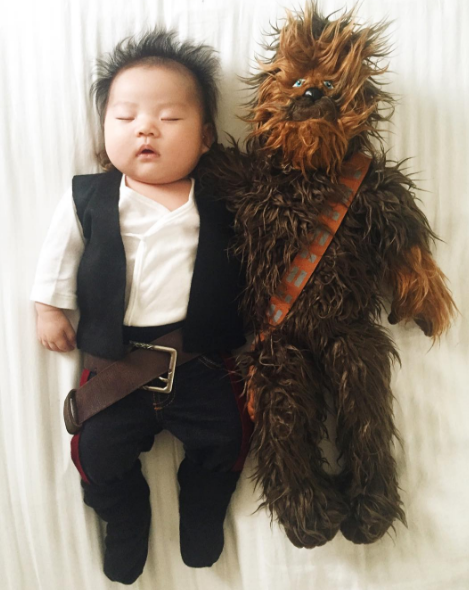 “Los Angeles-based photographer and new mom Laura Izumikawa has found creative inspiration in naptime, dressing her 4-month-old daughter, Joey Marie Choi, in costumes while she sleeps. The outfits and props are mostly derived from pop culture icons like Jon Snow, Pikachu and Beyoncé, as well as movies and TV shows like Stranger Things and Star Wars.

Izumikawa had planned to sleep while her daughter slept, but quickly found this wasn’t right for her. “I would end up just staring at her face all day and night because I was just so in love,” she told The Huffington Post. “Because Joey slept so deeply, I thought it’d be fun adding little props on her just to send some hilarious pictures to our parents. It was a way to memorialize her growth and little milestones.”

For Joey’s part, the costumes don’t bother her and she usually sleeps through it. “A couple times she’s woken up while I’m dressing her up, but she’ll just look at me a little dazed and then fall right back to sleep,” Izumikawa told The Huffington Post. “I really hope she’ll see the photos and videos in the future and have a good laugh. Hopefully she’ll see how loved she was.”

Izumikawa hopes her project will encourage other parents to express their own senses of humor.  “I hope that these photos and videos will make people smile and also remind parents to have fun with their kids and not get too caught up in the seriousness of parenting.”