An Honest Letter From Camp 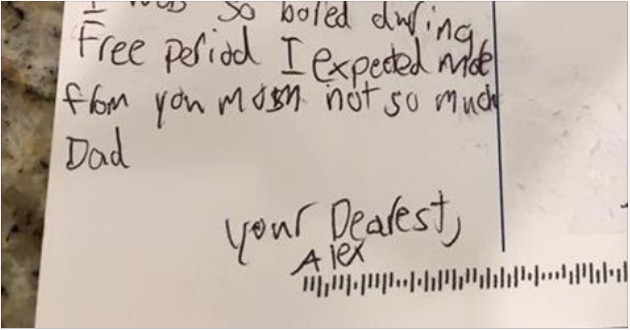 There are two types of letters you expect to get from your kid when they’re at camp:

1) I am having a great time at camp. I had no idea life could be this much fun. You have kept me from feeling true joy. I am never coming home.

2) I am having a terrible time at camp. I hate it here. If you love me, you’ll bring me home immediately.

What you don’t expect is a letter so harshly hilarious that you need to share it on the internet for the rest of world to marvel at. But that’s the kind of letter that 11-year-old Alex sent to his mother, Simone, from camp this summer.

According to The Huffington Post, the betrayal began when Alex and his parents spent time before camp putting together a box filled with “cards, Legos, yo-yos, and a new book he had been wanting to read” so that Alex would have ways to keep himself occupied during “free periods.” Unfortunately, they forgot the box at home. This was, apparently, just another in a long series of letdowns Alex has had to endure thanks to his parents, and he wrote them a letter to let them know how disappointed he was in their actions.

“Mom + Dad,” the letter reads, “Why the h*** did you not check if I had toys? I was so bored during free period. I expected more from you Mom, not so much Dad. Your dearest, Alex”

We love so many things about this letter, which is magnificent in its ice box coldness. First, there’s the fact that there’s no “Dear Mom and Dad” or “Hi Mom and Dad,” it’s just “Mom + Dad.” You can tell it was a close call between that and “Dear Sir and/or Madam.”

We also appreciate that Alex let loose with a swear word, but made sure to censor it so that when his parents got the postcard he would remain blameless and without fault in this whole disaster. That’s the kind of quick-thinking that keeps him out of trouble while also allowing him to express how exasperated he is with his parents’ ineptitude. It’s the mark of a gifted emotional assassin.

But the real kick in the breeder balls is when he throws Dad under a little vehicle we call The Cutthroat Honesty Bus: “I expected more from you, Mom, not so much Dad” is a glorious way of saying, “Mom, I thought you knew better than to let Dad get in there and Dad this all up. Dad, you continue to be a disappointment. Do better.”

The hilarity of this letter did not come as a surprise to Alex’s mom, who told HuffPo that Alex has a great sense of humor and the letter was, indeed, meant to be funny: “Alex is definitely known for saying very funny, witty and insightful things!”

Alex’s mom did end up getting his box to him, and he sent her (and just her, Dad) this lovely note:

“Dear Mom, Thank you for the package that you gave me. I am working on a Lego set. Are you doing anything interesting I am. I love you and hope you stay safe. Love, Alex.” Now, we’re sure that that last line isn’t any kind of veiled threat, but all the same, his folks might want to send up a couple of Lego sets or a refrigerator box or whatever else will keep this kid occupied.