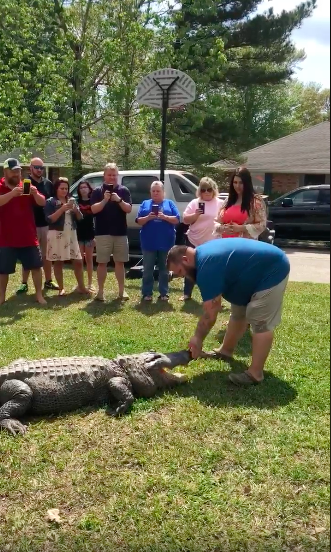 Gender reveal parties have been a trend among parents-to-be for a while now. An announcement that used to be made via voicemail is now an event with couples coming up with more and more creative ways to tell their friends and family the sex of their baby. It was only a matter of time, of course, before this fun and occasionally bizarre game of one-upmanship turned into a dangerous game of cat and mouse in which the prize is the most amazing gender reveal ever and the cost is getting your arm bitten off by an alligator.

Over the weekend, Mike Kliebert and his girlfriend Rebecca Miller took gender reveals to the next level — a level that involves the risk of death and maiming. You see, Kliebert is a third-generation alligator wrangler who owns and runs Kliebert’s Turtle and Alligator Farm in Hammond, Louisiana, so when it came time to pick a way to reveal their baby’s gender, Kliebert knew there would be exactly 0% messing around: “First thing that came to my mind when my girlfriend and I decided to have a gender reveal party were alligators,” he told The Huffington Post. “They’re a big part of our family, so why not incorporate them into our reveal?”

In the video, which has now been viewed over 7 million times, Kliebert puts a watermelon filled with Jell-O into the alligator’s mouth. When she snaps her powerful, bone-crunching jaws shut, the watermelon explodes and reveals the blue Jell-O inside. Kliebert and Miller are having a boy, and it was only mildly terrifying to watch.

The video was posted to Facebook by Kliebert’s mother, Melody, who wrote, “Just found out my grandbaby is a…gotta love it!! And I do!! No matter the results!!” We assume by “results” she’s referring to whether the baby is a boy or a girl and not the possible loss of life. If she’s not, then that’s pretty hardcore, Grandma.

Speaking of Grandma, Mike Kliebert noted to The Huffington Post that several of the people in attendance, including Miller, are trained alligator handlers. This makes perfect sense after you watch the video and see people and not smoking tire tracks.

Obviously, if anyone was going to do a gender reveal with an alligator, the Kliebert family are the ones you want doing it. But what about all the idiots out there who are going to try to out-do them? We worry that this is where we’re heading:

Maybe just buy some streamers or a nice cake.