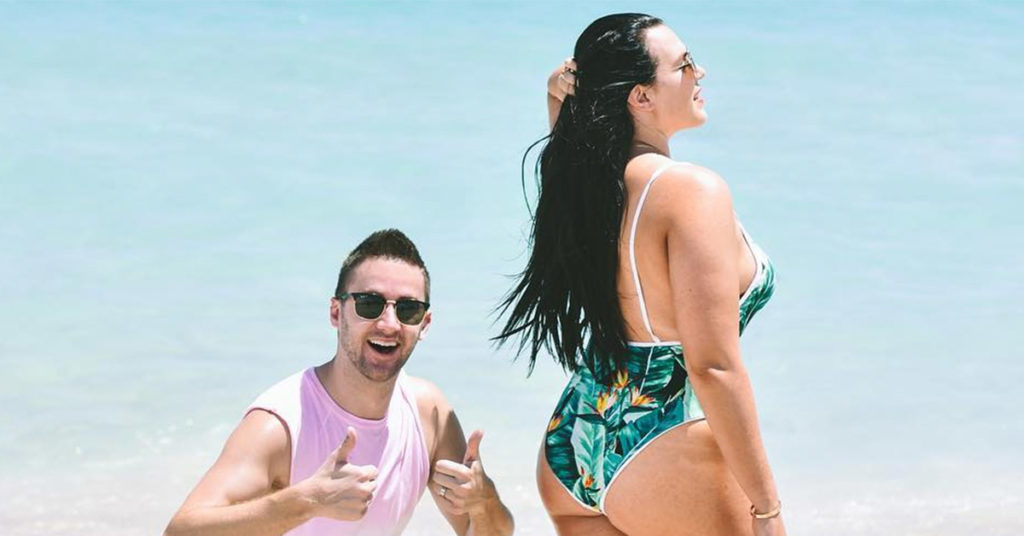 Robbie Tripp, the “I Love My Curvy Wife Guy” known for a polarizing Instagram post, is still trying capitalize on his meme fame, most recently with a book called Create Rebellion. Tripp is once again embroiled in controversy—and inspiring more internet jokes—after feminist site Babe delivered a searing review of the book.

Last year, in a post promptly turned into a meme, Tripp shared the maxim “I love this woman and her curvy body.” He described being teased for his attraction to women on the “thicker side” and apparently sought praise from the self-congratulatory post. But the internet ripped him apart for basically saying he “loved his wife” even if she wasn’t conventionally beautiful.

|| I love this woman and her curvy body. As a teenager, I was often teased by my friends for my attraction to girls on the thicker side, ones who were shorter and curvier, girls that the average (basic) bro might refer to as “chubby” or even “fat.” Then, as I became a man and started to educate myself on issues such as feminism and how the media marginalizes women by portraying a very narrow and very specific standard of beauty (thin, tall, lean) I realized how many men have bought into that lie. For me, there is nothing sexier than this woman right here: thick thighs, big booty, cute little side roll, etc. Her shape and size won’t be the one featured on the cover of Cosmopolitan but it’s the one featured in my life and in my heart. There’s nothing sexier to me than a woman who is both curvy and confident; this gorgeous girl I married fills out every inch of her jeans and is still the most beautiful one in the room. Guys, rethink what society has told you that you should desire. A real woman is not a porn star or a bikini mannequin or a movie character. She’s real. She has beautiful stretch marks on her hips and cute little dimples on her booty. Girls, don’t ever fool yourself by thinking you have to fit a certain mold to be loved and appreciated. There is a guy out there who is going to celebrate you for exactly who you are, someone who will love you like I love my Sarah. || photo cred: @kaileehjudd

His book is making similar waves, though not because of his thoughts on his wife’s “beautiful stretch marks” or the “cute little dimples on her booty.” The description of the book on Tripp’s website says it’s “an avant-garde stream of consciousness written to inspire creative minds.” Babe writer Harry Shukman isn’t a fan, saying in a review that the book “reads like the Unabomber manifesto.”

Those are scathing words, and in the same post called “Bet you can’t tell the difference between Curvy Wife Guy’s book and the Unabomber manifesto,” Shukman asks readers to determine whether certain passages are from Create Rebellion or the Unabomber himself.

“It’s a totally incomprehensible rant, an impenetrable and frightening pamphlet that rails against his enemies and praises his own superior talent,” Shukman writes before coming to the conclusion that a certain passage is “crazy as fuck—like, write-a-hit-list-on-a-high-school-bathroom-wall crazy.”

Tripp is not pleased with Shukman’s comments. His lawyer sent over a letter to Babe’s editors calling the review “targeted harassment” and defamatory.

BREAKING: WE WILL NOT BE SILENCED https://t.co/4Vq2dJgTGz

Shukman issued a response, stating that Babe’s readers deserve to know that, “in our opinion, the Curvy Wife Guy’s book sucks an entire ass.”

The website’s editorial staff then gave a statement to BuzzFeed News, citing the following: “Congress shall make no law preventing the trashing of a dumb book, or prohibiting the free shading thereof; or abridging the freedom of speech, or of the press; or the right of babe dot net to peaceably critique ‘abstract manifestos for disruptive creativity’ written by an Insta-famous weirdo obsessed with talking about his wife’s thiiiiccness.”

Tripp told BuzzFeed that he believes Babe is obsessed with him.

“My number one goal on social media has always been to spread positivity and encourage others to love themselves and chase their dreams, and I just find it sad that there are people out there who choose to spend their time and energy trying to tear others down and conjure up controversy,” Tripp said.

It’s messy all around, but folks are eating up the drama on social media.

The real news here is the guy who became a meme for his cringe-worthy praise of his wife on Instagram makes six figures a year on brand deals with mcdonalds, alaska airlines, etc.

truly there are two Americas and never the twain shall meethttps://t.co/Z8KXKczUnX

I LOVE MY CURVY LAWSUIT https://t.co/VJYb6qJ1HG

I love how much I hate this guy https://t.co/mKOkhvCU1h

It’s unclear how the situation will shake out at this time, but there’s surely more hilarity to come.