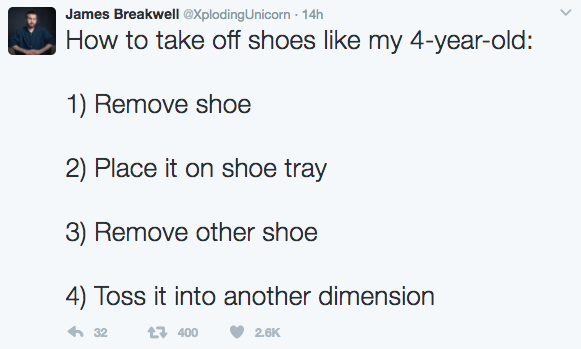 Being a parent is a tough job, but it helps to keep a sense of humor. That’s where James Breakwell comes in. The comedy writer and father of four is the author of the @XplodingUnicorns account. There, Breakwell chronicles the day-to-day difficulties of being a husband and father, often in the form of conversations he has with them. It’s pretty obvious right away that the wife and kids are just as funny as he is, but in the end, we all win.

Being a dad means always being a shoulder to cry on.

And wipe your nose on.

And spit up on.

6-year-old: Why do you take a long time in the bathroom?

5-year-old: I wish we all had infinity dollars

Me: That’d wreck the economy

Me: Go to your room until you understand inflation

Me: They pay me a salary.

5. Girls do mature faster than boys.

3-year-old daughter: A boy at daycare said he likes me.

3: He colors outside the lines. He needs to grow up.

[watching a guy on TV do CPR]

5-year-old daughter: Why is he kissing her?

Me: You put your coat on upside down.

Me: Your hood is on the bottom.

My daughters are running around the house talking about fairy dust.

Me: You forgot to brush your teeth. They’re going to fall out.

10. The Tooth Fairy is a little light right now…

Me: Oh. She left your quarters with me.

Me: She left them at the bank

Me: You’re my princess, and this is our realm.

5: *looks around our house* This kingdom sucks.

5-year-old: You don’t have many friends to play with.

5: I told my teacher you always play with yourself.

Me: *takes away brachiosaurus* Pick one with horns. Rookie mistake.

14. The birds and the regrets.

5-year-old: Where do babies come from?

Me: When two people love each other very much, they make a mutual decision to ruin their lives.

My wife:“That’s not the shirt I sent her to daycare in.”

Me: How was daycare?

3-year-old: I didn’t punch anyone today.

Me: *buys her ice cream*

[getting back from church]

Wife: You took change from the collection plate!

Me: I’m holding her.

Wife: That’s a six-pack of beer.

Me: *sprints for the fridge*

Toddler: *spills an entire bowl of popcorn and then eats it off the floor*

4-year-old: What happens when you die?

Me: You go to heaven.

Me: Getting dressed every day is part of growing up.

3-year-old: Growing up is stupid.

Me: I have no counterargument.

I’m sure she’s mine. pic.twitter.com/C1FntjdRUE

Random person on the Internet: You’re such a great dad!

Me: *continues ignoring my kids to waste time on Twitter*

24. Together everyone achieves more.

I thought there was nothing worse than when my kids fought.

Then they started working together.

Me: *hugs the baby* Now that I have kids, I finally know how you feel, Dad

Dad: I said I love you

26. Who needs real emotions when you’ve got emojis?

That’s 5 more emotions than I use in real life

Me: As your first child, I’m your heir, right?

My dad: You mispronounced error.

What to do if a woman says…