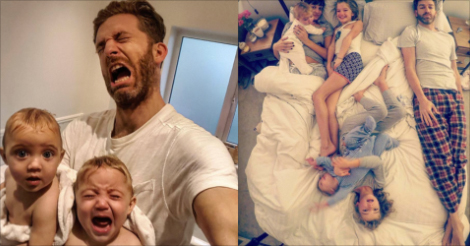 London-based Dad Simon Hooper leads a busy life with four daughters under 10–including one-year-old twins. On his Instagram page father_of_daughters, he chronicles the day-to-day difficulties of parenthood.

Already an operations director for a U.S.-based management consultancy firm, Hooper explains that being a parent is like having many different jobs at once. “A handy man, taxi driver, swimming instructor, tutor, chef, counsellor, human climbing frame, bank, personal shopper and PA,” he told the Huffington Post.

“In general my whole account is to show a realistic view of what parenting is like from a parent’s perspective,” he said. “There is way too much sugarcoating when it comes to parents, so I wanted to share what it’s really like and provide a bit of humor at the same time.”

His goal is to help parents feel like they’re not alone, and hopefully make them laugh along the way. Check out the gallery for his hilarious photos and musings on parenthood.

1. “Another monday, another last minute rush to the shops to avoid the armageddon I.e running out of nappies, wipes & baby crack (milk) for the addicts. I basically live in this aisle of the supermarket now. New parents seem to gravitate to me as an “experienced parent” (i.e. the tired looking guy shivering in the corner) and ask “do you know where so and so is please?” My reponse – “Sure 3rd shelf, half way down on the left hand side, buy 3 & get a discount,although you want to use that in combination with blah blah blah.” I’m like a walking encyclopaedia of baby product info. I used to use my brain to solve global corporate wide problems. I now use it to calculate bulk buy discounts.”

2. “Someone call crime watch! I took this picture of a guy getting mugged in broad day light today. The 2 confidence tricksters are known in the local area and ply their trade by pretending to love their victims and then, when their guard is down, scratching their faces to pieces, pulling their hair and dribbling on them until they are given milk or rice cakes. The suspects are described as looking exactly the same, to the degree that their father cant tell them apart. They are around 2.5 ft tall, talk with a strange accent and are incredibly cute. Some previous victims had said they smell like a childrens play centre toilets but that has yet to be confirmed.”

3. “Clemmie gave me a pretty simple job this evening – “go pack the baby bag” (we’re going away for a night). A plan developed in my head (why can’t I take anything seriously?!) I called her in – “well you said pack the baby bag!!”, expecting a laugh. She didn’t. I then suggested cutting holes in the bottom for their legs to hang out like those dog carriers but @mother_of_daughters was already less than pleased that i’d used her prized leather @kerikitbags for lols, so with my tail between my legs, I repacked. A shed load of nappies, baby crack (milk powder), toys they won’t play with & a monitor – There was still enough room for half my family in there!”

4. “Why does bathtime always involve cramming as many family members into one of the smallest rooms in the house at the same time? I guess the eldest 2 like it as it’s like a cheap version of the sea life centre. They get to watch these weird pink slippery things splash about and generally contort themselves out of these chairs while sucking the life out of some sponges. Clemmie and I are there just play life guards and crowd control. I should charge admission. Just avoid the dirty nappies at the door and the water EVERYWHERE. Actually, forget it – Health and safety would definitely shut us done.”

5. “After dressing the twins as pink fisherman and managing to navigate passed the people selling flashing swords and whirling things without parting with money, we celebrated bonfire night in style. And by style I mean dealing with a huge melt down, an explosive poo that happened against my chest in the carrier literally 2 seconds after this photo was taken (and no nappies) and spending £8 on chips that were luke warm. It was all worth it to see the twins faces when the fireworks started. Fun night out in Crystal palace.”

6. “The curse of being called Simon when at a children’s birthday party – I am immediately rolled out for the obligatory game of ‘Simon says’. Of course I take it easy to start with and filter out those that can’t keep up. After separating the wheat from the chaff, we get to the hard core pros who know their stuff. I finally kill them all off with the old stand on one leg, close one eye and stick out your tongue. The remaining kids think I’m taking it too seriously, get bored and run off leaving me looking like a proper tool. I might have taken competitive dadding too far- they’re only 6 after all, oh well.”

7. “Reading at bed time can be a pain in the ass, especially when you’ve got ‘important’ adult things to do, but that’s no excuse to not to do funny voices for the characters in the story. But what if you didn’t do them? They may lose interest and decide books are boring. They may not read much as they grow up, leaving them intellectually and culturally stunted. They might jack in school and start hanging with the wrong crowd. They may end up in a dead-end job they hate and drink too much. They may get evicted from their 1 bed squat and end up living under a bridge, sniffing stolen marker pens with a guy called crazy bob who eats pigeons. For the love of the children, DO THE VOICES!”

8. “The wonders of modern technology. Why, oh why did I give my eldest an ipod touch? Yes, its great to stay in contact while im away but my inbox is now full of emoji based spam from my bored daughter. (The emoji poo is a firm favourite). Today while in meetings, I convinced her that because I’m 8 hours ahead of her (I.e. in the future), I could send her the lottery numbers and shes guarenteed to win as i already know the winning ones. Took her a while to figure out that wasn’t actually the case, made me laugh though! FYI Yes I look shattered but I’ve been travelling for 22 hours so what do you expect!!”

9. “These two have been round my ankles all day, literally. I’ve been walking around as if there’s broken glass on the floor to avoid stepping on them (no one wants to hear that cry you get when you accidentally tread on a small hand that’s not where it should be – that’s the point when you give yourself the ‘shittest parent of the day’ award). At least they do a good job of cleaning the floors, I should put Polish down and strap a rag to their stomachs. Might as well get them to pull their weight from an early age. FYI the tiles are from best tile UK. Encaustic Moroccan cement tiles.”

10. “If there is one thing that us dads are good for its being used as a mobile human climbing frame. We’re practicing our routine for britain’s got talent, the talent being how many family members can hang off me (kind of a real life buckaroo game) before I slip a disc and crumple into a pathetic mess crying like a child who’s grazed their knee for the first time. Now all I need it for @mother_of_daughters to get on my back and the twins to rest of my shoulders and the award is surely mine. Come see us on the BGT tour next year.”

11. “we have A LOT of toys for the girls. Some hand-me-downs, some brand new. We offer up the hand made, ethically sourced, non toxic, bespoke blocks made from organic, carbon offset wood, lovingly sourced from Norway. They look down their nose at them with disgust, decide they’re tosh and toss them to one side. Then they go on a rampage to find keys, my wallet, my phone, anything that resembles a remote control and plastic packaging. If that fails, they bug me until i give up the goods. Many mornings, you’ll find me running around the house, quietly cursing the babies, who’ve hidden my cash / debit card and /or keys. guess I should get used to this as I hear teenage girls take the same stuff.”

12. “What do you get if you cross claires accessories with 4 girls, 2 of whom who have just drank a coke, and a tired dad? 10 minutes of dressing up followed by 20 minutes of trying to get them to leave. There’s just too many of them, you get one and the other sods off to hide in the hair bands – I can hear the giggling, I just can’t see them through the haze of pink and sparkles. At least i found the tiara i was after. I look Bangin’!”