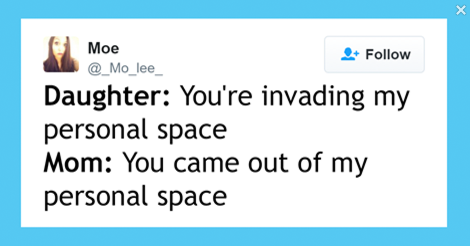 2016 brought us a lot of things. Good things. Bad things. And more than a few bizarre things. However you feel about this year though, there’s no denying that Twitter, as usual, gave us plenty to laugh about, especially where parenting tweets are concerned.

Check out this list of the year’s funniest tweets about kids to see what we mean. You don’t need to be a parent to find them funny. All you need is a sense of humor. Which one is the funniest? Let us know in the comments below and don’t forget to vote for the best!

My 14yo made fun of me this morning because I had to go to work while he had a snow day, so I changed the wifi password.

[looking up at the night sky]

Me: You can make a wish on any star you want.

5-year-old: Which one is the Death Star?

Me: Why do you fight me every single morning?

4: Because you never learn.

My youngest is being tested for the gifted program at his elementary school and my other son thinks his toothbrush is haunted.

I don’t care how cute your kid is. When you wake up in the middle of the night and see them standing next to your bed, they are terrifying.

[two of my four kids burst into tears]

Random lady walking by: Why are you crying, girls?

Me: It’s cute that you think there’s a reason.

My daughters took turns tracing each other over and over with chalk.

Now it looks like 25 children were murdered in my driveway.

My 2-year-old handed me a candy bar.

I hugged her for finally learning how to share.

Turns out she just wanted me to open it.

Me to my son: You remind me of me.
Son: That’s just mean.

My kids wanted to know what it’s like to be a Mom so I woke them up at 2am to let them know my sock came off.

Kids’ ears are amazing. It takes 7 times to hear “Pick up that toy” yet they can hear a bag of chips open at 50 yards.

My 11yo wrote me an apology for misbehaving in the car that included “I love you so much but sometimes forget to care about your existence.”

My son was crying and asked, “why doesn’t the dog have to wear pants?” And it’s like, I don’t even know. So now I’m putting pants on a dog.

I lead the after-school drama club at my kid’s school. A 1st gr said, “Can you teach me how to act like I’m listening when my dad talks?”

When I want my kids to eat something the best chance I have is to put it on MY plate, where apparently food becomes immediately appetizing.

Me:”Sweetie, what do you say when you do something wrong?”

My kids cleaned the kitchen without being asked & now I’m afraid of what they want from me.

Being a dad means always being a shoulder to cry on.

And wipe your nose on.

And spit up on.

Child’s new thing is to spin in circles till he’s dizzy and falls down. This is the 2 year old equivalent of going to the bar.

I constantly google “how to put your kids up for adoption” so my kids can find it on my search history and know that I’m not messing around.

7yo: I could see you and my teacher getting married.
Me: I’m married to your mom.
7yo: Well you could get a divorce.

You know you’re truly a parent when you are required to show the pictures in the book you are reading to the stuffed animals in the room.

And then one day we decided we were tired of sleeping in and doing whatever we wanted whenever we wanted in a clean house, and we had kids.

Me: Your mom told you to stay in bed.

3-year-old: There’s a scary monster in my closet

Me: Scarier than Mom?