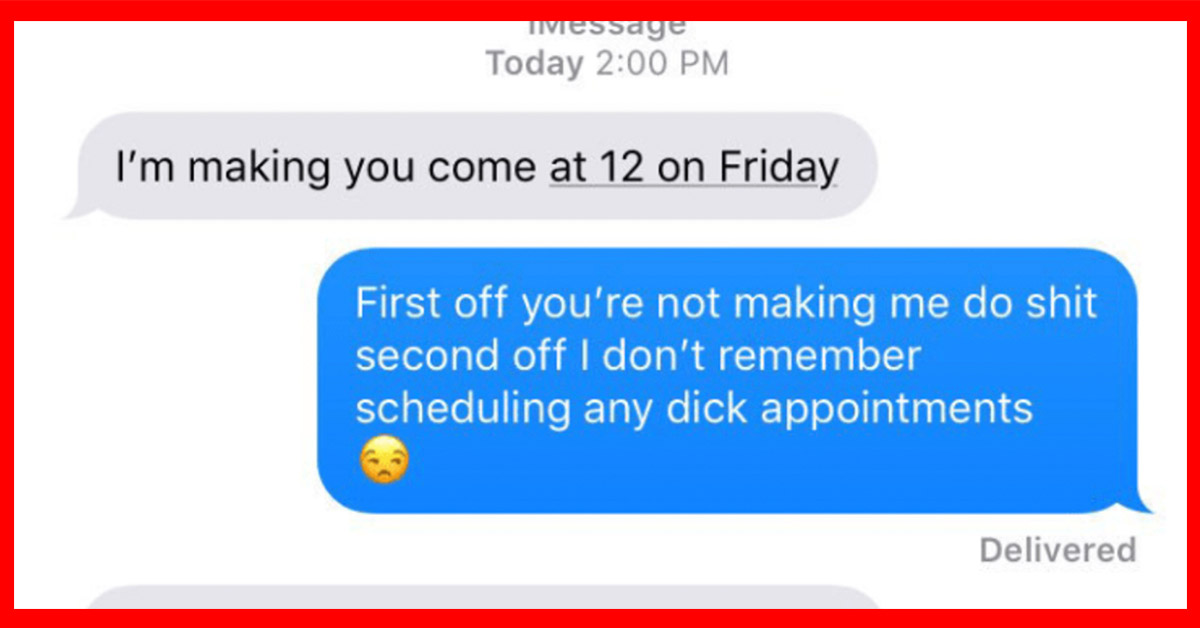 We all have moments in our life where we wish we could crawl under a rock and die right there on the spot. Like, when we say the wrong thing at the wrong time–to the wrong people.
If anyone understands this, its Twitter user Cory Hrobowski. The 19-year-old worked for a small web design company in Chicago at the front desk–before he was forced to resign. Why? Well, sending some inappropriate texts to your boss (by accident) could do the trick.

Hrobowski received a text message from an unknown number saying that they were making him come at 12 on Friday.

Unsure of who the number was, Hrobowski assumed that it was a girl trying to force him to come over for, well, sex. He responded by saying that the person wasn’t making him do sh*t and that he didn’t remember scheduling a d*ck appointment.

But, the response he got back was pretty unexpected–the unknown number was his boss.

Not knowing WTF to do–he didn’t answer. But, she followed up saying that they were going to “discuss his employment” tomorrow.

Clearly, that has to hands down be one of the most embarrassing and “well, FML then” mistakes one can make.

I have bad experiences with unknown numbers so I get fed up pretty quick.

Not knowing what to do, he decided to share the text messages on Twitter (boy, have you done lost your mind?) Obviously, they blew up and went viral. Before he knew it, Hrobowski was basically Twitter famous.

At this moment I knew I fucked up ? pic.twitter.com/DVIOaxnZlW

People were coming up with hilarious responses and excuses to try and get their boy out of this awkward and uncomfortable situation.

Apparently, the tweet was seen enough that the company had reached out to Hrobowski asking him to refrain from using their name in any conversations–seeing as they are a web design company, they know a thing or two about going viral online. And, as for Hrobowski himself–he had to quit.

“I resigned due to the fact that Twitter blew the situation up.”

But, let’s be real–he would have quit anyway. How do you expect to face your boss every day after telling her that you didn’t schedule a d*ck appointment with her? No thank you.