‘Libraries Should Be Replaced By Amazon Bookstores’ Sets Internet Ablaze 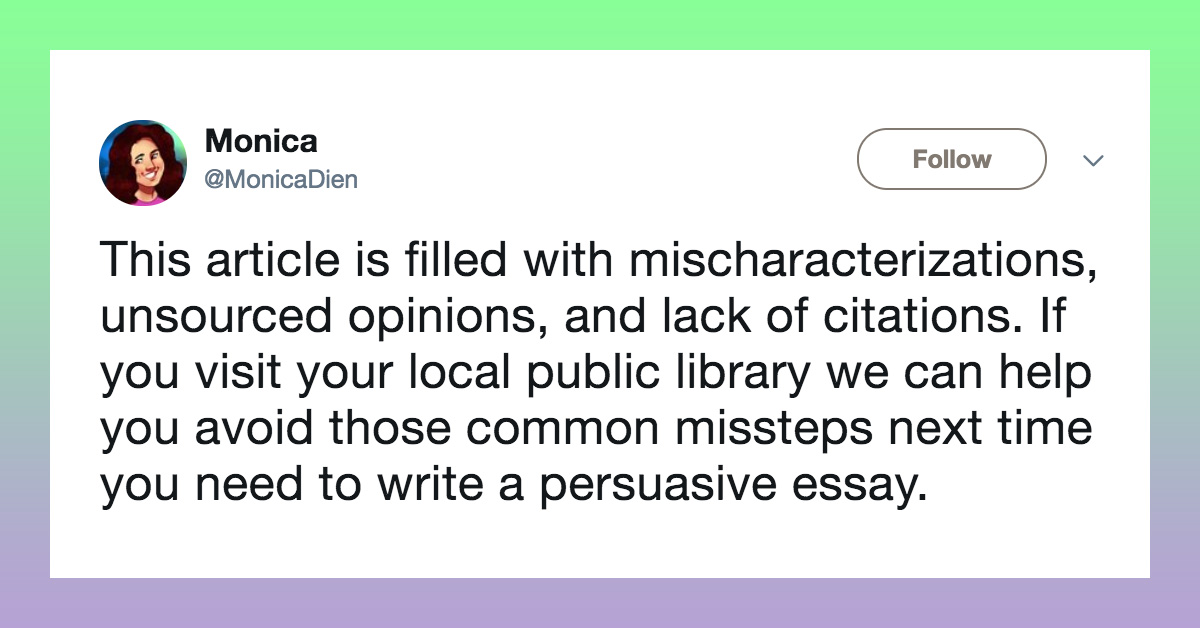 Hell hath no fury like a librarian told that the library’s free services should be obsolete.

Over the weekend, librarians and library supporters completely shut down a Forbes article that went viral for asserting that public libraries should be replaced by brick-and-mortar Amazon Books locations.

In the piece, viewed nearly 200,000 times by Forbes‘ account, the writer, Panos Mourdoukoutas, argued that society and Amazon could benefit from Amazon Books’ takeover of libraries.

Not only would taxpayers be free of that pesky library tax, he wrote, but Amazon could increase its stock value (because, you know, benefitting a private company should be reason enough to eliminate a public resource). Gone were the days of community spaces, research resources, and free movies and TV shows—Starbucks draws in writers and researchers with coffee, Mourdoukoutas argued, so that whole “usable public space” problem is taken care of.

Amazon Should Replace Local Libraries to Save Taxpayers Money via @forbes https://t.co/weDGYAqjTS

Mourdoukoutas’ tweet of his article received a few hundred retweets and likes, but thousands of replies, the likes of which filled with people telling him how misguided and ignorant his article was.

Across Twitter, library workers and users obliterated Mourdoukoutas’ article, tearing it apart from thesis to conclusion, wondering if his arguments would have been as poorly formed if he had just properly done his research on libraries and their offerings at a proper library. Critics pointed out that not only are private spaces like Starbucks not free to use, but Amazon Books itself doesn’t have access to the kinds of resources that libraries provide, particularly out-of-print books, magazines, and other media.

This article is filled with mischaracterizations, unsourced opinions, and lack of citations. If you visit your local public library we can help you avoid those common missteps next time you need to write a persuasive essay. https://t.co/YnvVG2XvZQ

Others read between the lines of the writers’ argument, coming to understand that he just wants to get rid of the libraries’ services altogether, and doesn’t understand what it’s like to not have the funds to just rent out a public space yourself or buy a cup of coffee to use the internet for free.

If one assumes that Mourdoukoutas’ main motivation is anger that the poor have access to high-quality resources, his argument makes perfect sense. The fact that libraries provide services that Amazon doesn’t is the entire point: His goal is to get rid of those services.

Finally caved and read this, and it is clear that, among other very valid criticisms, it is written by someone who has never been very broke/needed free stuff. Like, he thinks going to Starbucks and going to the library are interchangeable. https://t.co/V2TinXWsBr

“It wouldn’t save taxpayers a dime, & would harm marginalized communities,” writer Mikki Kendall tweeted. “It is clear you haven’t been in a library & assume that means no one else goes to them.”

It wouldn’t save taxpayers a dime, & would harm marginalized communities. It is clear you haven’t been in a library & assume that means no one else goes to them. https://t.co/NC8rKGKNH3

The entire point of libraries is that they exist to provide resources and education for those who can’t afford purchasing everything from a retailer.

Your idea would widen the access and education gap between the Haves and Have-Nots. https://t.co/8pw52qAavs

Everyone listing the benefits of public libraries is missing the point here. The purpose of articles like this is to portray “taxpayers” and “people who use libraries” as mutually exclusive groups. It’s to separate your neighbors into those who matter and those who don’t. https://t.co/dqpu1T9Q2x

Current and former librarians themselves scolded the writer at the idea that libraries could be at all replaced.

“I work in a public library and since lots of grade school libraries are closing due to funding problems, teachers bring their whole classes into got books,” Twitter user Rue Burlingham wrote. “This is the only public service that works for everyone—old or young, rich or poor. Privatizing is a terrible idea.”

I used to work for the Arizona State Library, Archives, and Public Records division. This is a TERRIBLE idea. Libraries should NEVER be privatized. https://t.co/WFPsLV6uuv

Hi. Librarian here. Providing equitable access to information for ALL, not just those who can pay a premium fee is the core of what we do. Protecting user privacy. Amazon would NEVER do this. All they care about is the bottom line.

This country has such a massive problem with ignoring its most needy. And the first things we want to do away with or make cuts to always seem to be the institutions that serve them.

What a privilege to think libraries are just for books.

Mourdoukoutas, however, wasn’t having it. On Twitter, he expressed that he still really likes the idea of cutting libraries to cut taxes—as if taxpayers and library users are not one in the same.

But are they worth our tax dollars?

But you don’t have to pay taxes!

Let me clarify something. Local libraries aren’t free. Home owners must pay a local library tax. My bill is $495/year.

While we might not be able to reconcile Mourdoukoutas’ math in all this,  there are probably a few other things we can agree on.

Going to the library next time you want to use factual resources on your library takedown piece: free.

Watching this guy schooled by a group of librarians for being utterly wrong about libraries: priceless.