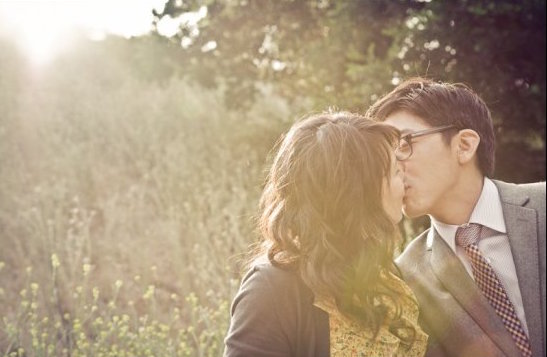 Every couple has its own unique obstacles to overcome on the way to being happy together. But this couple opted to depict those struggles in a literal way, while also paying homage to their shared love of horror movies: with a zombie-themed engagement photoshoot.

Juliana Park and Ben Lee are a Los Angeles-based married couple, who wanted to commemorate their upcoming wedding in a non-traditional way. (Something we’ve featured here before.) When they approached their photographer Amanda Rynda, she immediately loved the idea. Rynda hired an actor to play the zombie, and the four of them traveled to nearby Valencia for the shoot.

In the photos, Park and Lee are having a romantic picnic in a field when the zombies attack. The couple have to work together to defeat the monster. (Using a shovel conveniently left nearby.)

If you love a good creative photoshoot like we do, you’ll definitely enjoy this one, and by the end you might just be craving some braaaaaaaains.

Rynda and Park work together at Disney Animation Studios, as does the zombie they enlisted for the attack.

The couple transformed friend and co-worker Jason Boesch into a pale, tattered zombie in about 45 minutes.

And the zombie may even make a repeat appearance at the wedding. Park said: ‘We were thinking how funny it would be if he came dressed as the zombie,’ she said. ‘But we’re also thinking about the older people at the wedding who might be weirded out.’