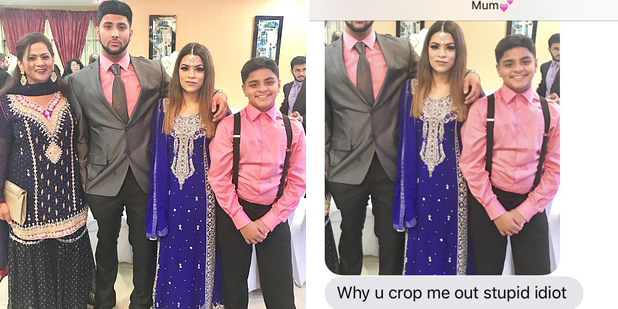 Weddings have a way of bringing out the drama. Abeera Tariq found that out the hard way when she thought she innocently cropped her Mom Noreen out of one of her wedding photos.

Tariq explained the cropping was because Noreen had appeared in hundreds of other photos from that day, and Abeera had no pictures with just her brothers.

But then the texts came:

The messages came in a mix of English and Urdu. The Urdu parts loosely translate to “Ungrateful kids! I gave birth to you with such difficulty and now you crop me out?!”

Abeera and Noreen typically joke around like this, but this time the new bride felt bad. The two patched things up on the phone and now laugh about it.

In the meantime, Abeera’s Tweet of the cropped photo and text exchange has gone viral. Noreen is enjoying her newfound Internet fame, and the comments people have made:

@Abeeraww I showed my mom this and she gave me a lecture about how at least you take pictures with your mom unlike me ???