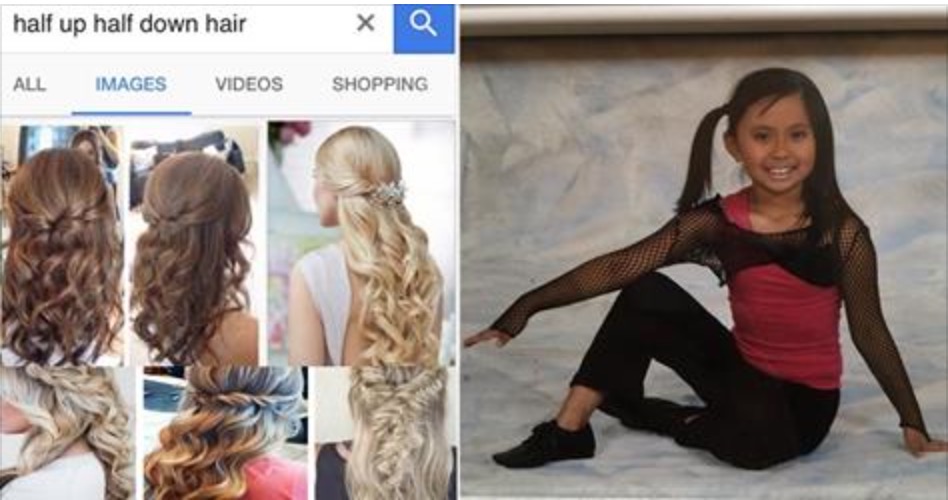 Hanna Angelica Rosales De Castro, 17, of Pearland, Texas was going through some old photos when she came across a picture from a dance class she took when she was 8. For the photo, the students were asked to wear the same costume and come in with the same “half-up, half-down” hairstyle. Looking at the photo now, she realized that her hair looked different from all the other girls. It turns out that Hanna’s mom had a slightly different interpretation of what “half-up, half-down” meant, and that old dance class photo has now gone viral.

My mom was told to give me a half up half down hairstyle. She didnt know what that meant so she did this.. pic.twitter.com/4WmaJxVqcl

It looks like her cousin, Jennifer, who took the class with her, had a mother who was similarly confused.

i guess none of our moms knew what they were doing… pic.twitter.com/9whnyrbzO6

As of this writing, De Castro’s tweet has been liked over 200,000 times and her photos have appeared everywhere from Buzzfeed to Cosmopolitan. As sons and daughters, we understand this because we all have moms who, for example, when you asked for those cool rubber bracelets everyone was wearing in the 80’s gave you actual rubber bands instead? Or when you asked for a Furby gave you a Furdy. (“They’re the exact same thing, William!” “No, they’re not, Mom! You don’t understand anything!”) And as a mother, I understand this because they never said which half and for pete’s sake we are doing the very best we can, here. When I was a kid we didn’t even have…hair. Or something like that.

this reminds me of my sisters third grade yearbook picture ??? pic.twitter.com/jQjvnpzoAe

Some up some down ??‍♂️ pic.twitter.com/AMtCl3ey9V

OMG TELL ME ABOUT IT pic.twitter.com/jghU5RGaoh

It was an epidemic, y’all. Thank God we now have Google images. Children will never again be humiliated by their mothers the way these girls were. Right? Right, kids? That’s right.