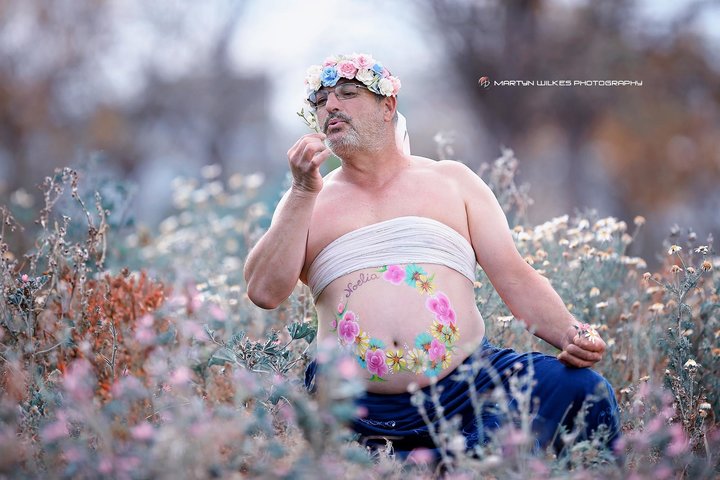 After a few too many maternity photoshoots in a row, Spanish photographer Martyn Wilkes wanted something different. Enter his buddy Francisco “Paco” Pérez.

Martyn and Paco have been friends for about five years, and Paco is known for self-deprecating jokes about the size of his belly. When Martyn told Paco he’d been doing so many pregnancy photoshoots, the two of them were inspired to do a parody series with Paco as the star. Martyn went all-in on the concept. He put together a suitable maternity outfit, made a garland out of flowers, and even painted a floral design on Paco’s belly. To complete the ensemble, Martyn wrote the “baby’s” name on Paco’s stomach. With everything set, the shoot was on.

Martyn and Paco both have kids. Martyn has a 5-year-old girl and 13-month-old boy, and Paco has two daughters, 22-year-old Natalia and 26-year-old Virginia.

So why does Paco’s belly say “Noelia”? Funny story.

Shortly after Natalia was born, Paco was tasked with filling out his baby daughter’s birth certificate. Unfortunately, Paco says, along the way he had a few too many beers and in his impaired state, wrote “Natalia” on the paperwork. Oops. (I guess “naming your kid” is one more thing to add to the list of activities you should avoid while drinking.)

In any event, Paco saw the photoshoot with Martyn as a chance to atone for his past mistake. Martyn, on the other hand, just wanted to make people chuckle. You can do just that by checking out the gallery below!

MARTYN: OK, now put your hands on your chest–

PACO: Oh, like my nipples are really sore! From being pregnant!

4. Looking to the heavens

“I don’t like the way the bird in this tree is looking at me.”

6. Ready for his closeup

Martyn told Paco to look “ethereal,” and this was the best he could do.

7. Looking at the ground

Mainly he’s thinking, “Was this a good idea?”