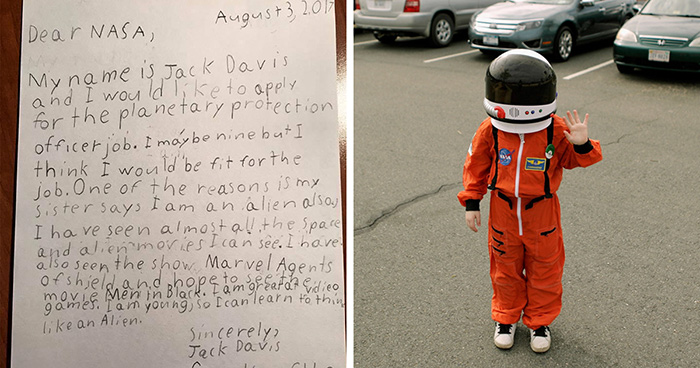 Last month, NASA announced that they were looking to hire a new Planetary Protection Officer. This job, which has the most impressive title ever (behind, of course, Curator of Mammals ) has been around since the 1960s. The fact that no one has heard of it is a testament to the secrecy with which the previous Planetary Protection Officer has conducted his or her planet-saving work over the past 57 years. But now, the time has come to train a young new protegé, and nine-year-old Jack Davis from New Jersey has offered himself up for the job.

In his cover letter, Jack presents himself as a promising applicant:

“Dear NASA,” it reads, “My name is Jack Davis and I would like to apply for the planetary protection officer job. I may be nine, but I think I would be fit for the job. One of the reasons is my sister says I am an alien. Also, I have seen almost all the space and alien movies I can see. I have also seen the show Marvel Agents of Shield and hope to see the movie Men in Black. I am great at video games. I am young, so I can learn to think like an alien. Sincerely, Jack Davis, Guardian of the Galaxy, Fourth Grade.”

Well, we don’t need to see anymore. Jack has reviewed all space and alien literature that doesn’t have boobs in it and is ready to blend in and act as a diplomat with other planetary leaders. He is clearly the best man for the job and we would absolutely feel comfortable putting the fate of our planet in his hands.

NASA, however, did not feel he was qualified yet but was impressed enough by his alien-movie-watching and video-game-playing resume to send him a letter back:

“Dear Jack,” wrote Dr. James L. Green, Director of NASA’s Planetary Science Division, “I hear you are a ‘Guardian of the Galaxy’ and you’re interested in being a NASA Planetary Protection Officer. That’s great!”

Listen, you don’t need to condescend to Jack, Dr. Green. He is almost old enough to see Men in Black and has an excellent reference from his sister.

“Our Planetary Protection Officer position is really cool and is very important work,” the letter continues. “It’s about protecting Earth from tiny microbes when we bring back samples from the Moon, asteroids, and Mars. It’s also about protecting other planets and moons from our germs as we responsibly explore the Solar System. We are always looking for bright future scientists and engineers to help us, so I hope you will study hard and do well in school. We hope to see you here at NASA one of these days! Sincerely, Dr. James L. Green.”

Ha! Nice try, NASA (if that is your real name). Your cover’s been blown, aliens are real, and only fourth-grader Jack Davis can save us all.

When 4th grader and self-proclaimed “Guardian of the Galaxy”, Jack, wrote to us about applying for a job, we replied https://t.co/932pj3Q50B pic.twitter.com/RhcGdnzGAw

We’re pretty sure NASA sent Jack a top secret follow-up letter that said something like, ” Dear Jack, Thank God you contacted us. We will send a helicopter to get you within the next 15 minutes. Say goodbye to your parents. A grateful planet thanks you for your sacrifice.”

Good luck, Jack. Please don’t get us all killed.