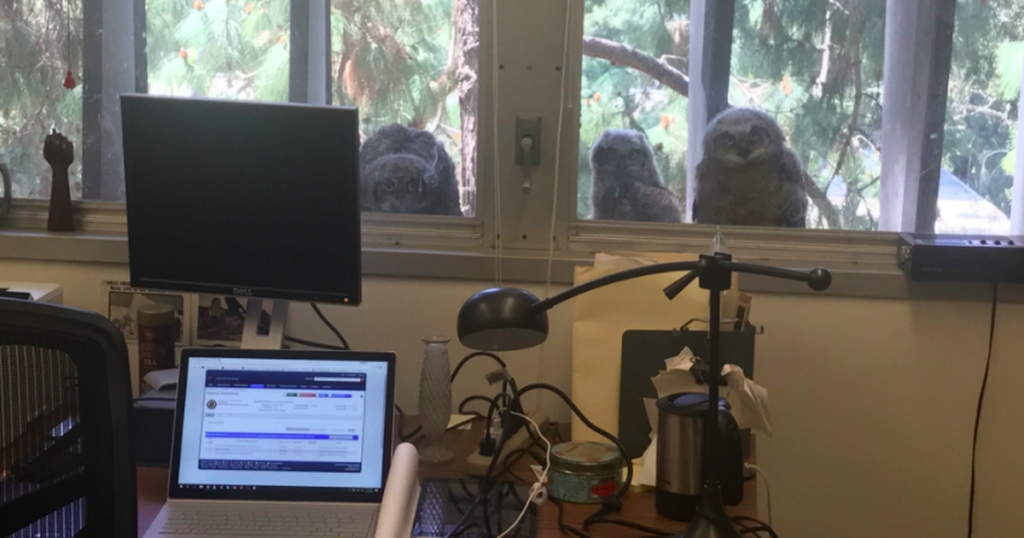 Acting as though this image of baby owls doesn’t bring boundless joy to your Friday morning is like sending owls to Athens; in other words, utterly pointless. According to UCLA Urban Planning Professor Michael Lens, a parliament of owls (that’s the term, look it up!) was born on his colleague’s windowsill several weeks ago.

Now the fuzzy babies are all grown up and staring into windows.

Owls were born on my colleague’s windowsill a few weeks ago and I. Just. Can’t. Even. pic.twitter.com/W6ZjP5TCZ6

It’s half cute and half disconcerting. Maybe it wouldn’t be had that 360-degree gyrating head scene in The Exorcist never been, but giant eyes and fully rotational heads are apt to cause unease every once in a while.

Anyway, Lens’ tweet racked up over 162,000 likes, 38,000 retweets, and 2,000 comments, many of WHOm were incredulous about people in that office being able to get any sort of work done:

A few shared owl tales of their own:

But mostly, people wondered about that one owl all the way on the left:

Yeah, that one. What’s the deal with you, buddy?

Whatever the case, I’d prefer to have a cat disguised as an owl outside my work window than no owl at all.