10+ Hilarious Parent Tweets About Their Kids 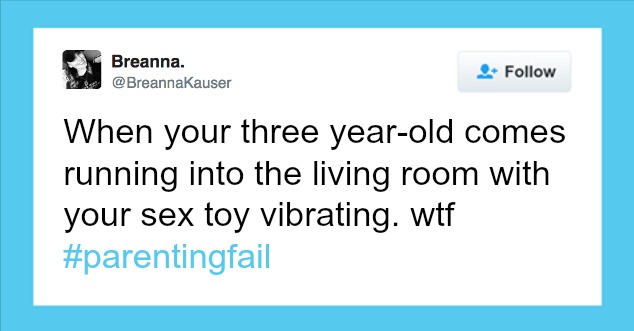 When parents hit up Twitter to tell the world about how their kids have made their lives a little bit worse, that makes the rest of us parents feel a little bit better. Yes, that also makes us a little bit terrible (just like the kids), but it’s usually hilarious because often these parents haven’t lost sight of the humor in their situations. Good on them! Sometimes kids need to be called out. And bravo for calling themselves out too on their #parentingfails. It’s refreshing to see that parent on Twitter hanging their head in shame. Oh the things kids say and do! And the stories that parents have to tell! Even in a short 140 characters we are gifted with great anecdotes.

Here are 15 parents who have had it up to HERE with their kids and needed to tell the world on Twitter.

1. Schooled By The Condescending Toddler

Me to toddler: "Oh look at the little worm in the pumpkin!" Her: "No Mummy, that's a caterpillar, can you say caterpillar? ? #parentingfail

This morning, I asked my son how his pancakes were, which I burned. His response: "They're not so gross you can't eat 'em." #parentingfail

Drying off after a shower with a hand towel because 4 kids used a billion towels. #mykidssuck #momlife

HENRY! Honestly, this kid cannot be left unattended – even for a couple of minutes #kidsbehavingbadly @billing_dairy pic.twitter.com/OWZvPp4uoY

My 6yo just asked to go to the yellow store with all the beer & cups because she can get a lollipop. #parenting #parentingfail #allthebeer

When your child sets a reminder so you know she hates you! #parentingfail pic.twitter.com/aUrIJd9waG

When ur 3 year old comes running out into the living room with your sex toy vibrating…?? wtf #parentingfail

11. Moms Can Be Really Inconsiderate

My toddler is mad at me because I wouldn't let her stuff animal cat drive the car home. #parentingfail #Caturday #toddlerlife

12. Better Than Drawing On Them?

Me:what u doing?
Kid:licking the toaster
Why?
Because it's warm
Prob not ur best idea
Ok, yes, I'll lick the wall!#parentingfail #toddler

In case you had a bad day, know my kid sipped her own pee off the bathroom floor. @kidsareworst #kidsare #disgusting #savage #Parentingfail

"You need to go take a bath."
Gavin: "No, I need to shoot the walking dead."
Oops. #parentingfail

Left my coffee cup unattended for 5 minutes, came back to it and my 3 year old has drank more than half. #funtimes #momlife #parentingfail pic.twitter.com/PDtmeZAbqP