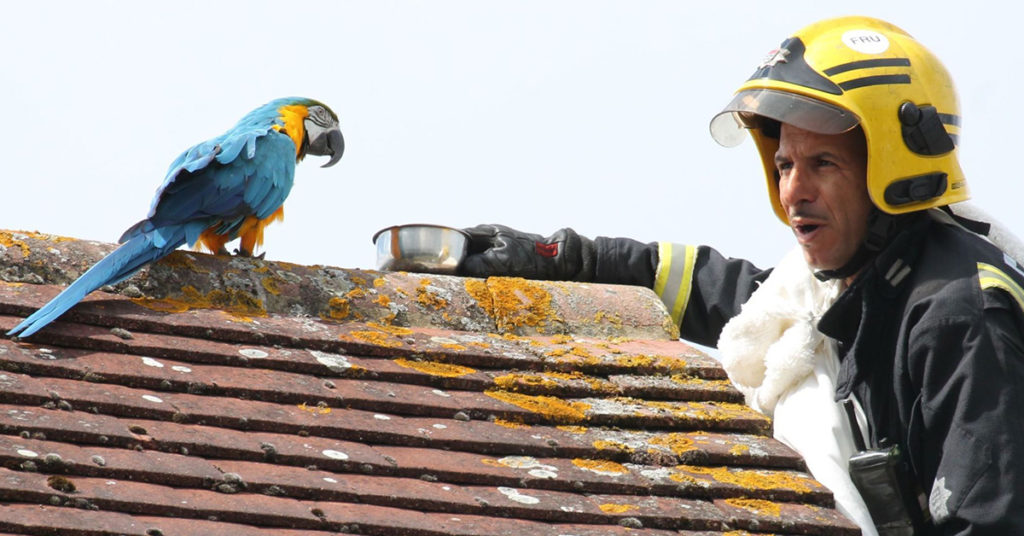 An abusive parrot named Jessie got herself stuck on a roof in North London, and proceeded to continually scream “f-ck off” at firefighters when they tried to rescue her.

Jessie spent a full three days on the roof of a house in Edmonton before her owner, along with the RSPCA, decided it was time to enlist the help of the London Fire Brigade. The turquoise and yellow macaw was eventually coaxed down, but not before she rained a hailstorm of obscenities on her rescuers.

According to Metro UK, Jessie’s owner told one of the firefighters to say “I love you” to the bird in the hopes she could be coaxed down by flattery. In response, Jessie screamed “f-ck off!” A Twitter LFB-issued statement joked, “Jessie then turned the air blue & flipped the firefighter the bird.”

“We then discovered that she had a bit of a foul mouth and kept swearing, much to our amusement,” an Edmonton fire station crew member told the publication.

Jessie and her owner also speak Turkish and Greek to one another, so the LFB tried to tell her “I love you” and “come” in both languages. Jessie again met adulation with expletives.

Watch Manager Chris Swallow was at the scene, and explained that all present were worried that Jessie may have been injured given her lengthy sojourn on the roof. It was at this point the macaw revealed she wasn’t hurt at all when she flew off to hang on another roof, then a tree, and then, finally, back to her owner.

Meaning Jessie straight up feigned injury just to have the opportunity to cuss at the authorities! We stan an aviary scammer.

Later on Monday, Jessie’s owners posted an update video of their sassy parrot. When asked whether had a message for firefighters, Jessie replied with a muffled and reluctant “Thank you.”

Jessie the parrot in now home safe & sound with her owner and she had this to say to the firefighters who came to help her in #Edmonton https://t.co/Th2nlVCq7I pic.twitter.com/3ABkzH2nHY

According to the fire service, the aviary saga lasted around an hour.