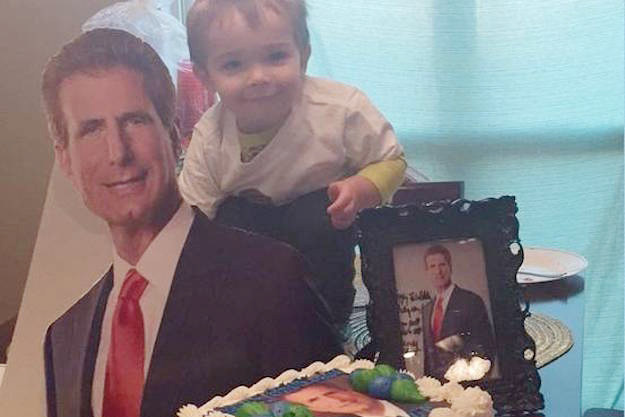 Mr. Bart is a familiar face in Louisiana thanks to his ubiquitous TV ads and a firm motto that would make Saul Goodman proud: “One Call, That’s All!” Maybe it has to do with the flashing lights and music featured in the spots, but Grayson can’t stop watching his ads, said Ms. Dobra, a nurse from Prairieville, La. “He’s always been very drawn to Morris Bart commercials,” she told Law Blog. “He used to watch ABC and color videos, and he used to love those. But now he wants to watch Morris Bart commercials.” When they’re not on TV, he watches them on YouTube. For his party in January, which was reported by the Advocate newspaper, she bought a cake with edible photo frosting displaying Mr. Bart in a suit.

The kid’s grandmother came through with a toddler-size Morris Bart t-shirt. Grayson unwrapped another gift to reveal a cardboard cutout of the lawyer. “He was kind of shocked,” Ms. Dobra said. The star of the party didn’t make an appearance, but after Ms. Dobra emailed his office about her idea, Mr. Bart sent her an autographed photo, Morris Bart key chains and a New Orleans Pelicans shirt displaying his logo on the back. The shirt was size extra-large. “He’ll have that for a long time,” Ms. Dobra said.

And who knows, maybe someday Grayson will grow up to be a personal injury lawyer too. A kid can dream.