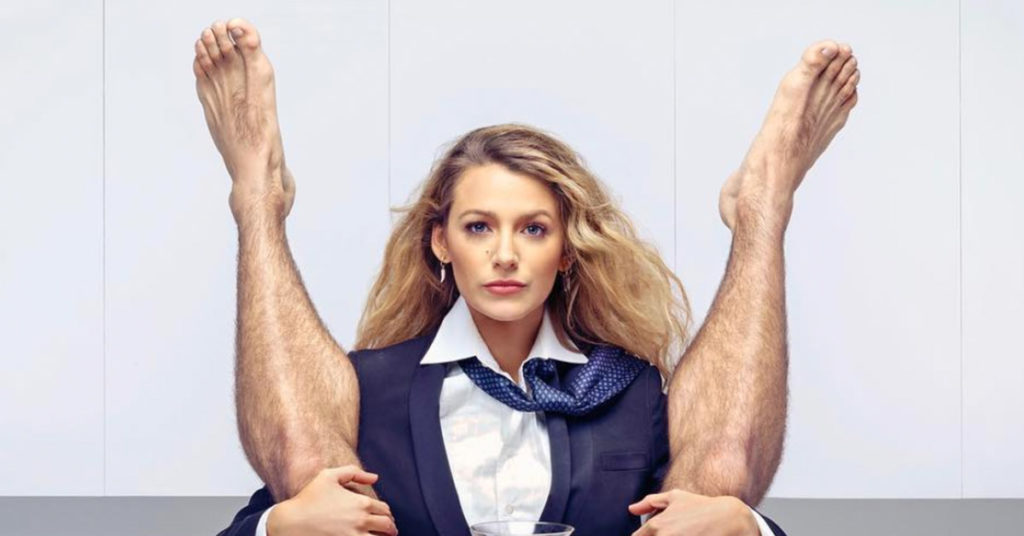 Ryan Reynolds and Blake Lively are one of those couples we could never get sick of. While they steer clear of major celebrity controversy, they’re always making headlines for relentlessly trolling each other to no end on social media.
Clearly, these two are #couplegoals. This week, Lively posted a picture to her Instagram feed to promote her new movie, A Simple Favor. The photo, like many others for this particular film, displayed Lively in a suit–a true authoritative power. Instead, this particular photo had her standing over a naked man, holding a martini for her.

Obviously, a photo like this was not going to be up very long before her hilarious husband, Ryan Reynolds, got a hold of it for a witty and funny comment. The Deadpool actor simply left a funny, and somewhat jealous, comment saying:

While they’re our favorite couple online, there are a lot of things about this iconic relationship that we didn’t know. If you love to swoon over celebrities as much as I do, here are 25 things you didn’t know about Blake Lively and Ryan Reynolds’ relationship.

1. Blake Lively and Ryan Reynolds met in 2010 when they were cast as the leads in Green Lantern.

2. At this time, Blake was dating Gossip Girl co-star Penn Badgley while Ryan was married to Scarlett Johansson.

4. Of that date, Ryan said: “That was the most awkward date [from their perspective] probably because we were just like fireworks coming across.”

@vancityreynolds didn’t even do one outfit change from the sidewalk to the inside. (Lazy)

5. Blake didn’t exactly feel that way, though. She said, “[That date] went well for him. I don’t know about fireworks for me.”

6. They’d sit around and try to think of people the other could date. “Oh, who would be good for you?” We’d sit around being like, “Oh jeez, do you know anyone?” And it didn’t click for, I mean, a good year and a half. Like, “Oh hey, wait, hold on. We could date!” says Blake.

7. After they were spotted together in Boston in 2011, sources confirmed they were a couple.

8. They fell in love in Japanese restaurant O Ya in Boston.

9. Blake and Ryan requested a coloring book so they could play Tic-Tac-Toe while on a dinner date in Vancouver.

10. In September 2012, Blake and Ryan held a secret wedding in South Carolina.

11. Featured in their wedding were: an impressive dessert table, a sky lantern release, and a performance by Florence Welch.

12. They say the secret to their successful marriage is that they don’t work at the same time.

14. She also likes the fact that “he lived so much before we got together, he’s the exact realized person that he should be.” Ryan is 10 years Blake’s senior.

Happy Birthday to my amazing wife.

16. Ryan says he played “Let’s Get It On” by Marvin Gaye while Blake was in labor with James.

Thumb wrestling isn’t always fair. Curiously, my hand is the small one.

17. He’s said he cried like a “sprinkler head” when his first daughter was born.

18. They made their first public appearance as a family in December 2016 when Ryan accepted a star on the Hollywood Walk of Fame.

Proud is a pitiful word to describe how I felt today. @vancityreynolds The permanence of your impact is undeniable …Always has been, but now we have a fancy ?to show for it. ?

19. One thing Ryan does that annoys Blake is talk in a movie trailer voice.

20. The only woman with Blake’s permission to “creep up on” Ryan is Martha Stewart. That’s because she “saved” their wedding from becoming “a disaster.”

21. Blake loves to bake so much that Ryan dubbed their kitchen “The Blakery.”

22. The couple are big fans of HGTV’s Fixer Upper.

23. Oh, and they love playing Guitar Hero together.

24. They’re both really good at giving gifts: Blake once surprised Ryan with a book of short stories written by loved ones, and he once gifted her a video compilation of important people in her life.

25. The most romantic thing Ryan says he’s ever done for Blake is fly halfway across the world to see her for one day.