A Funeral To Remember 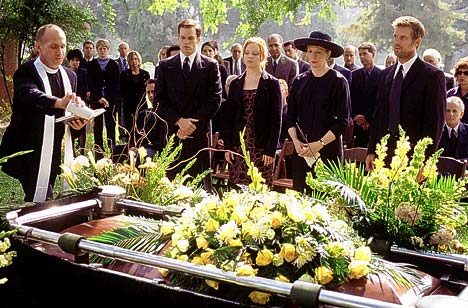 What’s the worst thing that ever happened to you at a funeral? Reddit user throwaway231112 probably has you beat–and it’s probably a good thing they made a throwaway account for this story:

Two weeks ago my grandma passed away at 94. I wasn’t that close to her, as she lived across the country and we rarely saw each other. The funeral was scheduled for a week later (last week), and I accepted to be one of the coffin bearers (not sure what you call those in english). After the church ceremony, we drove 10 minutes to the cemetery, where she would be buried. The hearse drove her all the way to her graveside.

We waited a while for everyone to gather. A ton of people showed up, most of whom I had never seen before. It was also the first funeral I had ever been to, and being there with all these people I didn’t know made me very uncomfortable. The weather didn’t make it any better–it had been raining for three days including today.

We carried my grandma from the coffin wagon to her grave, where we would lower her down. It was tricky getting into position and connecting the ropes to the handles on the coffin. On both sides of the grave there were two planks placed on the ground for us to stand on, as it was muddy from all the rain. When I stood up on it, I instantly felt how “wonky” it was, but it seemed stable enough. We slowly lowered the coffin into the grave and let go of the ropes when we felt it touch the bottom.

Then it all went wrong.

There were three of us on the plank: my brother, my uncle, and me, with my uncle being in the middle. My brother stepped off the plank, and my uncle still had one foot on it, when I felt the plank slide under me. I started to fall into the grave. Everything went into slow-motion. Without thinking, I grabbed onto my uncle’s arm. While I found my balance, he slipped and lost his.

The next thing that happened was something so terrible, I will never forget it in my life. He fell straight into my grandma’s grave and landed on her coffin. Which thankfully didn’t break, because this was already terrible enough as it was.

I remember the gasp from the crowd, and my mother’s look of disbelief.

The rest of the day was too painful to think of.