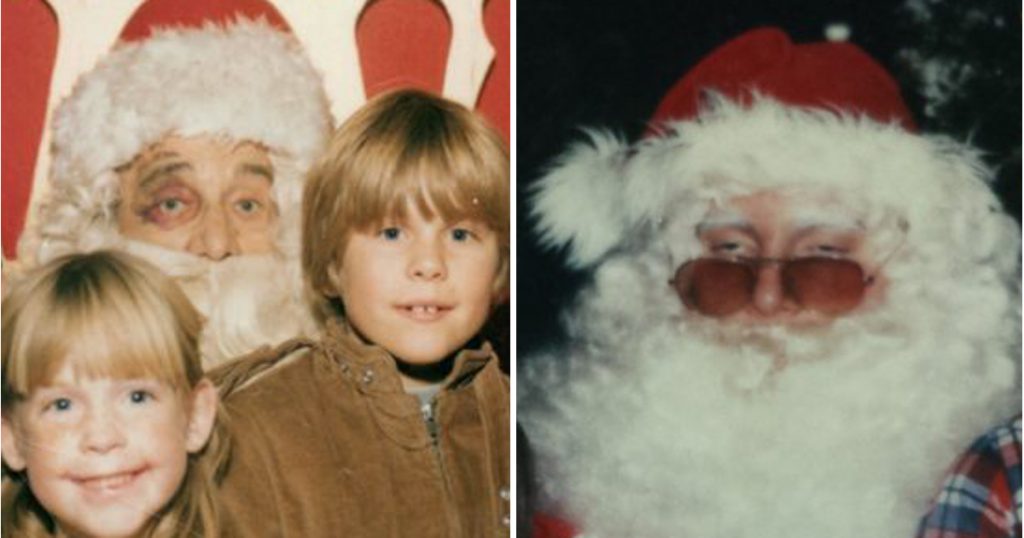 When you think about it, Santa Claus sure seems like he’s on a bit of a high horse. Who is he, you might ask, to pass some moral judgment on us, and to dole out punishment and presents accordingly? Has Santa never found himself on the wrong side of the naughty list? Good thing Awkward Family Photos is here to check on how that jolly old elf gets his jollies. Over the years, we’ve seen him acting weird, creepy, sleazy, and even downright criminal, and we’ve collected some exceedingly awkward evidence to prove it.

“My dad took this photo with his ex-wife and stepdaughter, thinking it would be funny and cute to showcase a naughty Santa getting arrested. I don’t think he realized though, just how naughty it seemed when he sent it off as a greeting card to family and friends.”

Sometimes, we know if he’s been naughty too.

“My parents took me and brother to see this ‘Bad Santa’ sometime in the late 80s. […] It wasn’t until 20+ years later we realized he looks angry and drunk and is flipping the bird in every picture we took!”

“We dug this gem up recently.  None of us realized how creepy the Santa was except our baby sister.  We still aren’t sure where the camera actually was.”

Even Santa has regrets.

It’s the most wonderful time of the year.

“This was taken back in 1971 when I was about 18 months old. My grandmother had one of our cousins dress up as Santa to surprise me and my aunt (who is holding me). I’m not sure what happened to Santa on the way over…..looks like he was run over by one of his reindeer.”

“The memories around this pic are fuzzy, I suspect that I have blocked out Santa trying to lift my shirt and/or pinch my nipple. If I had to guess, I was probably around four years old (1979). Clearly, I am horrified by the look on my face.”

“My memories of meeting Santa are fond ones. I came across this pic, however, and was startled by the look on this particular Santa’s face. He looks a little less interested in what I want for Christmas, and a little more interested in how I’d taste in a stew.”

Looks like Christmas is not just about the children.

“This is my ex-boyfriend’s family. c.1964. He and his twin brother and sisters and Dad are “enjoying” Santa’s visit. They lived in Red Lodge, Montana in the day, so perhaps a more realistic St. Nick was hard to come by.”

“My Mom took my brother, sister and I to the mall to get a “nice” Santa photo taken. When she picked up the photo, she was outraged.”

“This is a bought picture of my husband and his younger brother’s annual trip to visit Santa. Apparently, Santa was having a bad day and was a making it known in his pics! Funny thing is they didn’t notice Santa’s sign language until they were looking through old pics and came across it a few years ago!”

Eh, to hell with it.