The 13 Strangest Board Games Ever 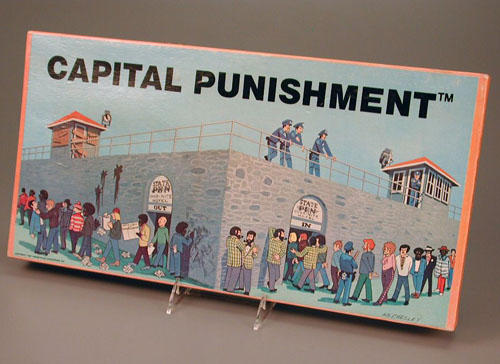 Our friends at Flashbak compiled this list of the most peculiar board games and we thought it was too good not to share.

As a kid, can you think of anything more miserable than playing this game? A sampling of the cards:

“A stranger offers you a ride in his dirty black van. Go back five spaces and pick a Therapy Card.”
“Your kite is stuck in a power line.  Lose a limb – and a turn.”

Perhaps it’s just my jaded 2014 brain that sees something wildly disturbing in this game.  But as soon as I become resolute that this is all just innocent fun, I take a look at the Japanese version, and my mind is right back in the sewer.

As a sort of obscure reference, I can’t help but be reminded of the Gom Jabbar in Dune…. Let’s hope this box doesn’t come equipped with a needle tipped with “meta-cyanide”.

Should be called “Killing Innocents with Your Surfboard”.  The object of the game evidently is to gang up on lone surfers and straight up murder their ass.  Homicidal fun for the whole family.

“For Ages of Over 6” – It’s never too early to inculcate an appetite for light bondage.  Should be called “Grope Loop”.  God I miss the seventies.

Do her parents have to chaperone so closely?  It’s just an innocent board game.  Although, I do detect an air of sexual tension, and I presume players must be high (absinthe is optional).

Earns a place on this list for having the least appropriate game title, as you press DOWN the pegs.  (The only time anything is pressed up is to reset the game.)

I wonder what Sigmund Freud would have to say about this game.

The name of the game is to avoid being killed by Bigfoot – which means this creature is not friendly…. which means that the Bigfoot on the cover is obviously going to eat these children.

The less said about this one the better.

Plainly, a terrible idea for a board game.  “Your lung cancer is in remission, move ahead three spaces”.

A few years later, the same company brought you an anti-drinking game…

Obviously, not to be played alongside this game…

“Just only for intelligent people.”  (Whoever wrote that is disqualified from playing.)

The only drawback to the game is that it may be difficult to find a lady willing to strip nude and get on all fours to become your game board.  Especially difficult for 12 year olds.

The very idea of playing Spin the Bottle with family curdles the blood. Yet, many questions remain:

Why does the man wear a wedding ring, but the woman does not?
What the hell are the two preteens doing in the background?

And lastly, does anyone reading this have a belt they can spare?  The poor lad on the bottom left is in dire need of one.