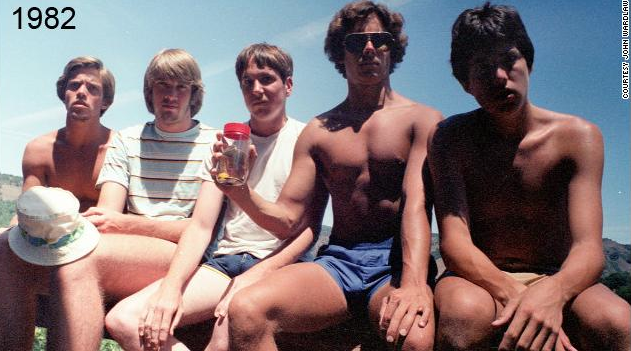 Groups of friends are notorious for making plans for the future and then never quite managing to make good on them. But this group of five buddies has actually kept a pact that began in 1982.

The five friends are named (left to right) John “Wedge” Wardlaw, Mark Rumer, Dallas Burney, John “Bevles” Molony, John “JD” Dickson. (Side note: how is it that every group of guy friends always has at least one first name repeated? It’s true for every group I’ve been in.) They began their tradition in 1982 when they went on a fishing trip as teenagers to Lake Copco, California. To cap off their excursion they took a photo on the railing of a cabin and vowed to return every five years to recreate it, which they have ever since.

Wedge maintains a website about the recreations and includes fun tidbits about the guys.  The photo series documents lots of changes in the group, from fashions, to hairstyles (and hairlines), to the aging process and weight fluctuations. As Wedge puts it, “There’s a reason we started keeping our shirts on in the photos.”

You’ll also notice that the same friend, John Molony, is always holding a jar. This is an homage to the original photo in which he was holding a Folger’s coffee can that had become the residence of a cockroach the group had declared their mascot.

Since the last photo was taken in 2012, the next photo is due this year, and the  friends have plans to make it happen. Here’s to many more photo opportunities in the future.