So, These 100 Goats Are Mysteriously Roaming A Boise Neighborhood 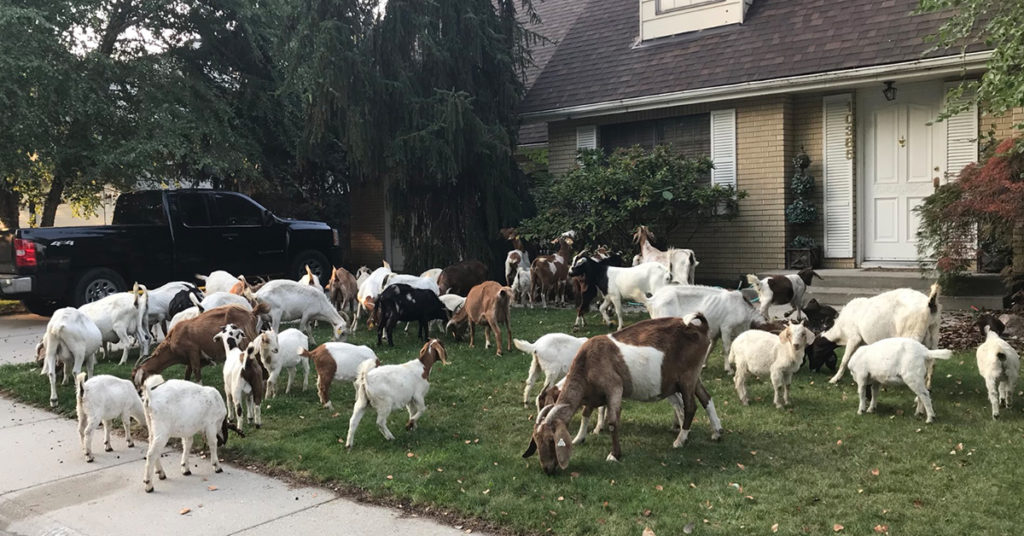 A neighborhood in Boise, Idaho, was roused from their beds on Friday morning as a veritable troupe of goats marched their way down the street.

“#Breaking,” wrote the reporter. “About 100 goats are on the loose right now in a #Boise neighborhood. They are going house to house eating everything in sight. Nobody has a clue where they came from…updates to follow.”

#Breaking – About 100 goats are on the loose right now in a #Boise neighborhood. They are going house to house eating everything in sight. Nobody has a clue where they came from…updates to follow pic.twitter.com/K0ghUwQEfk

The hungry little goats roamed up and down the streets snarfing down everything in their hoofed path. Because goats have four stomachs and are “reputed to be willing to eat almost anything, including tin cans and cardboard boxes,” their neighborhood adventure undoubtedly resulted in not only ravaged lawns, but nibbled mailboxes, car fenders, and lawn gnomes.

Another fun but ultimately irrelevant fact: Goats have rectangular pupils. So. Do with that information what you will.

This is not a joke. There’s around 80 goats loose on Summerwind Drive in Boise. It’s a residential area. pic.twitter.com/SkUjfJDW1i

Soon after the goats went viral, somebody (the company ‘We Rent Goats’ perhaps?) was called to take care of the situation and a truck emblazoned with the words “We Rent Goats” arrived to round up the flock.

Party is over “kids”! Loose goats have been cornered and loaded back onto a truck owned by “We Rent Goats” pic.twitter.com/qWHrb7X7n6

Parris shared a video (and pun) of the goats being loaded into the truck:

The “new kids on the block” are now off the block! The final goats are now reluctantly going home. What a morning pic.twitter.com/Quyca6owdy

The apocalyptic nature of this obvious sign from the heavens was not lost:

Boise is basically surrounded by goats on three sides, so it was only a matter of time before something like this happened https://t.co/MV0eaTQnBB pic.twitter.com/DjgHUiEXl1

Though some didn’t necessarily view that as a bad thing.

Even the goshdarn dictionary joined in!

Whereas others joked the goats were a ~sign~ from the NFL gods honoring Tom Brady on his birthday:

Here is a wholesome, earnest comment from a nice man named Charles Bryan:

According to KTVB, what happened was We Rent Goats, a company that rents out herds of goats “to clear weeds and help with fire suppression on private land and public property,” are indeed the owners of the herds, and that the goats were grazing nearby when they escaped and began their hungry rampage.

It appears as though alls truly well that ends well.