Why You *Always* Double-Check Pics Sent To Your Mom 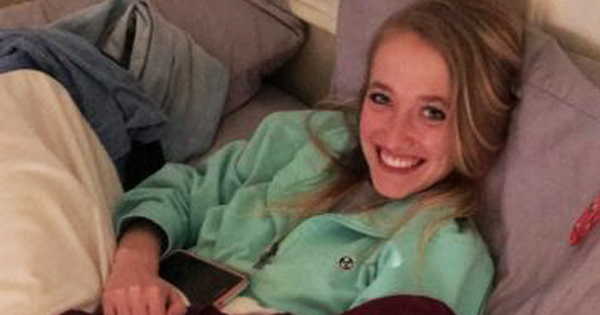 22-year-old Maison Vallance lives in Tennesse. He started dating Meghan about two months ago who after they met at a bar and “hit it off,” according to BuzzFeed News. The pair got on so well that Vallance introduced Meghan to his mom, and those two hit it off as well.

“They get along well, thankfully,” he said of girlfriend and mother, adding that him and his mom are “very comfortable” with one another.

Recently, Vallance’s mom asked him to find a shirt she’d given him which had his last name on it. When he found the shirt he he Meghan pose in bed with it so he could take a picture. He proceeded to post the picture to Twitter as well as sending it off to mom as proof that he’d found it. Meghan just looked “too pretty not to post.”

“I took this picture to let my Momma know I found the shirt she got me, but Meghan is too pretty not to post,” read his (since-deleted) tweet.

And that is where his good intentions went horribly, horribly wrong. Can you spot why? His friend Brooke sure did.

I’m going to regret this as soon as I ask, but the ropes…..?

As you may remember, Vallance had already sent the photo to his mom.

Everyone had a laugh.

She’s a restless sleeper and uses those to stay put

Each person places one hand in the rope. It prevents them from rolling over into each other and disrupting sleep. It’s an old hack from the 60’s.

Sent a similar text to my mom, we’ve been dating ever since ?

Bruh say you’re setting up a hammock… works every time

My mom found my kit once and asked if it was stuff for our dog and tried to take it outside and I almost had a fucking heart attack.

But don’t worry, Vallance’s mom would only have seen the ropes if she’d clicked on the picture to open it, which as we know, moms never do. Lucky break.

Luckily she didn’t click the picture to see the ropes ? pic.twitter.com/jtmp5FNiRl

what if she’s asking to borrow the ropes

Oh, and if you’re CURIOUS or ASKING FOR A FRIEND, these are the only things you need to set up your own, err, hammock:

Get y’all a headboard, 2 hitch rings, and some rope. Best $20 you’ll spend. pic.twitter.com/9QbgzTOt7z

You might wanna try some different rope. It’s a soft cotton, a bit more comfortable and comes in some nice colors pic.twitter.com/NzVEqZhPNN