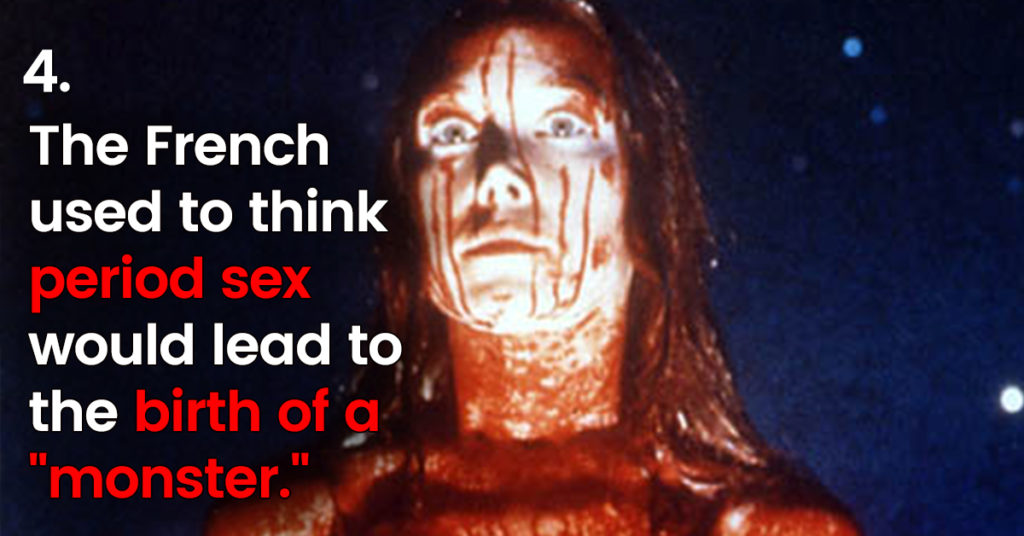 Here are some facts about periods throughout history that may actually help you forget the fact that it is 2018 and Donald Trump is trying to take away women’s access to birth control.

17. The Ancient Egyptians regarded menstrual blood as sorcery, using it to cast spells and create medicines. They also drank it. Sorry.

Along with Egyptians, Native American tribes such as the Nootka and the Navajo as well as certain Eastern Asian cultures all participated in ritualistic behaviors around menstruation, though these ceremonies were largely negative rather than positive. (Think: warding off evil, protecting land, and sneakily manufacturing “various kinds of love charms and potions.”

They first ‘softened’ this hemp-like textile by soaking it in the Nile, which was a raw sewage wasteland at the time.

15. They also believed menstrual blood helped cure sagging breasts and thighs, and would smear it all over these areas to beautify them.

14. The Ancient Greeks wrapped cotton lint around splinters of wood for their tampons.

They also mixed menstrual blood with wine and spread it over fields during spring planting, thinking it would increase the fertility of the soil.

“Turns new wine sour, makes crops wither, kills grafts, dries seeds in gardens, causes the fruit of trees to fall off, dims the bright surface of mirrors, dulls the edge of steel and the gleam of ivory, kills bees, rusts iron and bronze, and causes a horrible smell to fill the air. Dogs who taste the blood become mad, and their bite becomes poisonous as in rabies.”

You get the idea.

12. Throughout the Middle Ages, straight up bleeding into your clothes was the way to do it for literally a thousand years.

11. In order to easy a heavy or painful flow, Medieval European women would capture and burn toads, then wear their ashes in a pouch hanging near the vagina.

10. Some during this time believed period blood cured leprosy.

9. Others were convinced having sex with a woman who was on her period would make their penises rot and fall off. If only!

8. Early sanitary pads of this time were fashioned out of pieces of fabric, called “rags” or “clouts”.

7. In Elizabethan England these rags would sometimes come loose and fall on the floor, prompting people (men) to call them “monstrous clouts” and “filthy rags”.

6. Ancient Jews called referred to it as niddah. During niddah women were forced to separate their unclean bodies from society, lest their icky functions contaminate men around them.

At some point niddah transformed to mean “sin and impurity in general,” which really tells you everything you need to know.

5. Everything they touched during this time was cleansed by a Rabbi before it was deemed ‘clean’ enough for others.

After their niddah ended, women were once again allowed into the world to touch all the things! Until 3 weeks later…

4. The French used to think period sex would lead to the birth of a “monster.”

Or, more specifically, something “puny, languid, and moribund, subject to an infinity of fetid maladies, foul and stinking.”

3. Some cultures deemed period blood to be an aphrodisiac. In the African-American hoodoo tradition, it was believed that mixing period blood into a dude’s coffee would make him fall in love with you.

Frighteningly enough, some still do.

2. Brits in the 1800’s believed a woman on her period ruined food and turned wine into vinegar.

Seems like a good excuse to horde all the food and wine.

1. American schoolchildren in the 40s and 50 learned about menstruation by watching this Disney video:

Parenting was not really a priority back then.