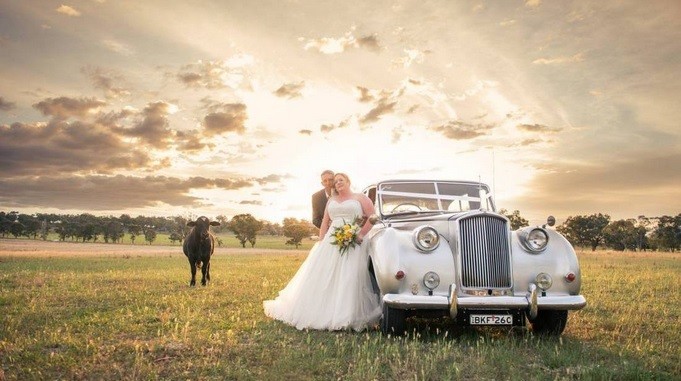 “Brian and Rebecca are Canola farmers hailing from a small country town named Breeza. Their wedding took place at the beautiful Pavilion Wedding and Function Centre in Tamworth NSW, Australia. After the ceremony had concluded, Brian and Rebecca had requested to incorporate some stunning paddock shots in to their photos. We ventured up to a paddock I use regularly for wedding shoots and positioned the beautiful Austin Princess hired heritage limousine in the paddock with the setting sun as the backdrop. I instructed Brian and Rebecca to lean up against the car for some ‘dreamy’ shots as the sky returned a golden hue. Whilst shooting away, a curious bull wondered down from further up the paddock and strategically positioned himself in the background of the picture. I informed the bride and groom that a curious bull was in the midst of photobombing their photos and to just ignore it as it was making a pretty cool photo. The curious bull proceeded to edge closer and closer to them. Eventually it stood right next to Brian and Rebecca, looking up at them as if to ask them ‘May I ask what you are doing in my paddock?’ The bull then started to sniff Rebecca’s wedding dress and they both became concerned that it was going to slobber on her beautiful dress. Brian then motioned to the bull to back off. As he did this, the bull retreated. I moved Rebecca and Brian away from the vehicle just in case the bull returned as he kicked up a bit of dust in a fuss when being asked to move away. Whilst recomposing Rebecca and Brian for some more ‘dreamy sunset images’ the bull stepped back in to frame. It was now evident he was going to show Brian who was boss! He started scraping the ground with his hooves, kicking up the dust. His back end raised in to the air and his head dipping to the ground in a ‘tiger pounce stance.’ He then charged towards Brian and Rebecca. Brian at first looked horrified…and then proceeded to charge back at the bull. The bull was rather startled by this and Brian chased the bull up the paddock in protection of his bride.”