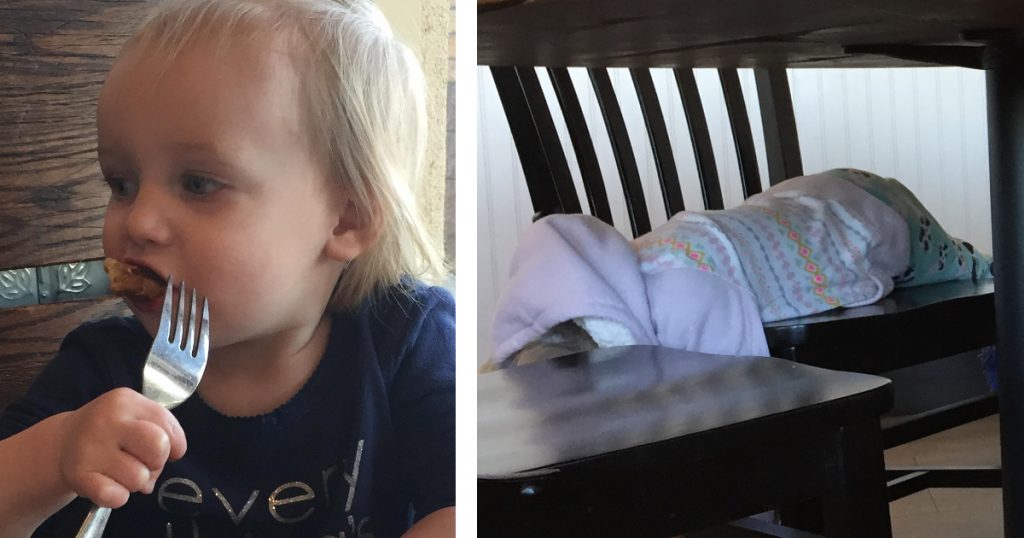 Eating out is one of life’s great joys…until you have children and then it becomes a struggle for survival. And how do you make it through an entire meal without driving yourselves and everyone in the entire restaurant crazy? Preparation is key and fortunately Imgur user cierramj10 has broken down “The 7 Stages of Dining Out with a Toddler”.

Take this handy guide with you the next time you take the little ones out and you’ll know exactly when to order, when to break out the distractions, and when to simply give up.

“Stage 1: The arrival. Look how cute and innocent they look. You stupidly think it might be ok. Everyone even chose to sit next to dad, it’s going to be a great Saturday!”

“Stage 2: Boredom. Your toddler is now bored. She can’t believe you brought her to such a lame place.”

“Stage 2: Boredom (con’t). But there’s sugar to play with and milk to pour back and forth between cups so it might be ok. Maybe. Probably not.”

“Stage 3: The toys. Oh look, here’s that book mom brought. Let’s read 3 pages then decide we’re done. You have now been in the restaurant for approximately 10 minutes. You’re out of things to do. Your toddler has spilled a glass of milk, drank a creamer (hazelnut, yum!) and yelled “cut” while wielding a butter knife like a tiny serial killer. You realize coffee was a mistake and you should have ordered a mimosa.”

“Stage 4: The purse. Just hope she doesn’t take everything out. But hey, at least she’s busy. ”

“Stage 4: The purse (cont’d). See all those empty tables? This is why you go to breakfast at 7am, less people to bear witness to the horror of 2 kids in a restaurant.”

“Stage 5: The food. Finally! Quick, try and shovel as much food into your mouth as possible in between shouts of “cut this,” “my sausage,” and “get off me!””

“Stage 6: The escape. After 3 bites your toddler is now done and you have yet to eat. She is now eating floor food and picking up all the trash she finds under the table. At least she’s responsible. You contemplate a to-go box but you look up and see your husband enjoying his awesome breakfast and decide you’re eating too dammit!”

“Stage 7: It’s go time. Your toddler is now recruited her older sister into her shenanigans. They are mimicking snakes? Lizards? Who the hell knows, but the people in the booth next to you think they’re adorable so you can still escape with your dignity intact. On your way out you decide that it was a successful outing, nobody cried and you didn’t have to carry anyone out under your arm like a giant flailing octopus. Now what do you do the rest of the day?!”