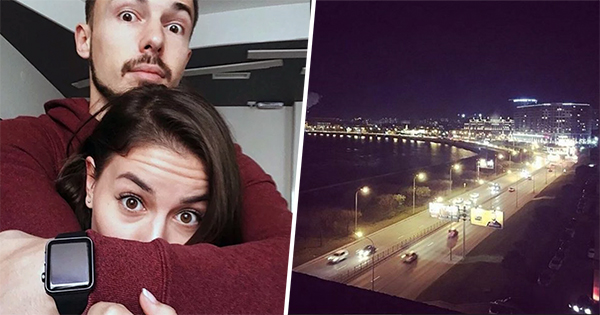 Finding out your SO is cheating on you is never a pleasant experience, and is even less so if you find out by your sleuth self rather than being told the truth. One dentist found this out in the most heartbreaking and gross way possible when she stumbled on a stranger’s Instagram.

Yulia Agranovych saw a photograph posted by a woman named Vlada Abramovich captioned “City Lights.” It wasn’t the beautiful view of St. Petersburg, resplendent with city lights and the stalwart Neva River. It was the fact that this view seemed very, very familiar. So familiar, that it was the literal same view she saw every night from her bedroom window.

On further investigation, Yulia discovered the woman who’d posted the snap had not only been in Yulia’s bedroom— she’d been all over her apartment. Lounging. Everywhere. “I wasn’t searching for anything,” said Yulia in an interview on the Russian news channel Ren-TV. “It was a normal morning.”

Further scrolling revealed photographs of Yulia’s husband Nazar Grynko as well as a sexy selfie taken by Abramovich, WITH THE CAPTION “Beautiful view from my husband’s bedroom.” Imagine seeing a picture of your husband’s mistress, in your apartment, claiming your husband was her husband. My heart bleeds for Yulia.

“Like any other person in the 21st century. I began my day browsing through my Instagram timeline, and suddenly I saw this very photograph,” she said.

“It turned out that this woman and I have a large number of the same subscribers. Having visited her account, I found many other interesting photographs, including those of my husband.”

When Yulia confronted her husband, he denied everything. Grynko told his wife that while she was away, he had invited some friends over for drinks before heading to the movie theatre (FIRST OF ALL, who drinks before going to the movies?) and that Abramovich was the girlfriend of a friend of his.

Yulia’s response? “When the guests came, they would have headed to the kitchen to drink tea – not to the bedroom.” Atta girl.

Vlada Abramovich made her account private after the initial discovery, but eventually addressed her role in the affair on her social media. She was utterly unapologetic, saying “She is his wife, not mine, what’s the problem? Is he just a vegetable without free will? Don’t make me laugh.” The chick’s got a point. She accused her naysayers of “living in the 18th century,” adding: “If I want to have sex, I’ll have it.” Again. The chick’s got a point.

Meanwhile, Yulia’s scumbag husband finally admitted that he’d been cheating on his wife with several different women when she was out of town, but maintained he’d never been “mentally unfaithful” because he had “told every girl he was married.”

EXCEPT HE DIDN’T EVEN HAVE THE DECENCY TO DO THAT.

“I loved this phrase about being mentally faithful,” said Yulia, before revealing she had contacted all his other lovers and admitting they had been far nicer humans than Abramovich. “The other girls were much more pleasant, one even crying on the phone to me, saying she had no idea he was married,” she said. “So he was successful in his sorcery.”

When asked about her next move, Yulia said she was not sticking around: “It will be divorce. I hope to do it quickly… such people never change,” she said. “If he finds a woman who is ready to be with him, and to accept it, let them be happy together. I’m so glad I got to know about it now and not when I became pregnant, for example, because we were planning to have a family. Or when I was 40, and we have three kids.” Talk about glass half full.

Another good thing that came out of this awful situation: Yulia revealed that her story had inspired many other chagrined women to leave their cheating partners. “Many women supported me, posting that they were proud of my bravery, that I openly discussed it with irony and sarcasm, so now they are ready to get rid of their unfaithful men too,” she said.

She ended this rollercoaster of a story by saying “Thank you, Vlada Abramovich – you are an experienced woman who taught me a good lesson.”