Women Are Sharing Pics Of Weird Stuff In Guys’ Bathrooms 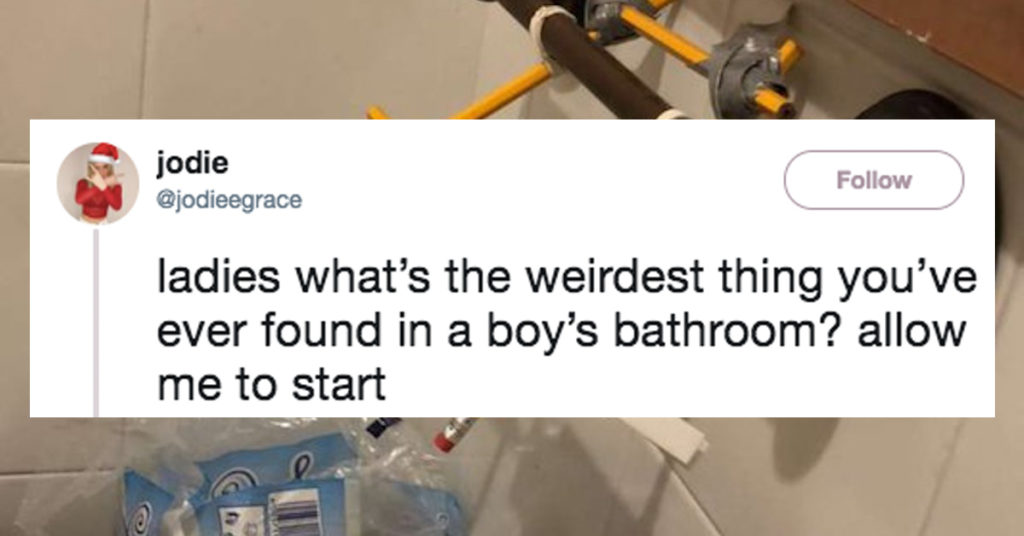 I don’t want to stereotype men here. There are lots of men who keep perfectly normal, clean bathrooms, without anything in them that would make a person stop and say “huh?” I think. I think those men exist, but I’m not positive, only because every guy’s bathroom I’ve seen is a huge mess with gross, weird things lurking in every dank-towel covered corner.

Twitter user Jodie Grace posted a picture of something she found under the sink in a dude’s bathroom that defies explanation. Well, I mean, I’m sure there is an explanation for it, but it’s not at all clear upon seeing the item (a hairbrush taped to a plunger). All I know for sure is, that brush is not meant for hair. UGH.

She included the text, “ladies what’s the weirdest thing you’ve ever found in a boy’s bathroom? allow me to start.”

ladies what’s the weirdest thing you’ve ever found in a boy’s bathroom? allow me to start pic.twitter.com/WbvwM86H4b

And many women responded, including pictures of the strange inventions and terrible nightmares that live in dudes’ bathrooms. Like this weird hose.

Or this toilet paper, which, what the?

this was the only toilet paper the bathroom had? pic.twitter.com/Vyhkhu5w56

This has to be the most ridiculous toilet paper holder in existence.

Oh my god, just get a toothbrush holder. Use a mug! Use anything other than actual rotting food!

I guess necessity really is the mother of invention.

was on his bedside table. I still had it on when he came out of the bathroom, he said he made it bc he always gets distracted when he reads. He made himself blinders for reading. pic.twitter.com/tZze8YlCu5

Then there’s this skinny guy hanging out in the bathroom, watching people go. Creeper.

What bathroom is complete without a picture of a clown?

This is the biggest cockroach I’ve ever seen.

Hey, at least they have a toilet paper holder. Baby steps.

Everyone loves Jeff Goldblum, but maybe not in the bathroom with you?

When it’s seriously time to do the dishes.

This is not okay.

Again, how much could a toothbrush holder possibly cost?

Okay, not everything in these guys’ bathrooms is awful.

This is the time for clean guys to speak up. Or else women will think that this is how the bathroom of every male they know looks.