You Can Now Buy A Designer Penis Necklace 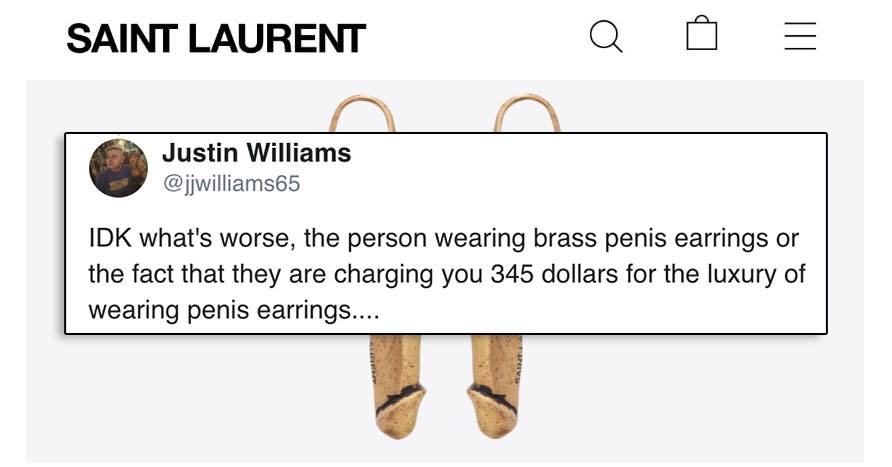 A person’s jewelry is, well, personal. It reflects their personality, their tastes, and their interests. But what if your main fascination in life is male genitalia? Shouldn’t there penis-shaped jewelry for you? And not some cheap bachelorette party favor, either–I mean a real piece of penis jewelry.

Well, friends, I’m happy to report that Yves Saint Laurent has you covered!

The French fashion house recently introduced a necklace and earring set that gives a whole new meaning to the phrase “the family jewels.” (Had to make that joke, sorry.) All the pieces are made from patinated golden brass, and the necklace features an adjustable clasp. The price? A cool £520. ($675.79).

Let’s clear up one possible point of confusion: no, isn’t a normal necklace that unfortunately resembles the male member. It’s a penis necklace. That’s what they set out to make, and that’s what they accomplished. Companies can do that now! An otherwise respectable business can straight up make a penis pendant, and nobody will really try to stop them. This is the world our parents and grandparents fought for.

Even better, the earrings have “Saint Laurent Paris” engraved on the back, so that you can let everyone know you’re an individual of refined taste.

And maybe they’re right! Not only are the necklaces and earrings already sold out, people on social media were clamoring for a set of their own.

On the other hand, penis jewelry had plenty of skeptics.

But this is far from the first time a fashion designer has been inspired to make bejeweled junk. In 2013, Ke$ha teamed up with Charles Albert to sell a penis necklace and earrings combo. This one wasn’t nearly as detailed as the Yves Saint Laurent version, and it barely deserves to be mentioned in the same paragraph.

In 2014, Tom Ford released a golden penis necklace that caused controversy because many thought it resembled a penis crucifix. Tom Ford was forced to clarify that no, the necklace was not using religious imagery–it was just a regular ol’ dong. For once, penis jewelry was the least upsetting option.

And then in 2016, Vivienne Westwood hit the runway with both silver and gold penis necklaces. This time, there was no mistaking them.

Fashion is one thing, but what if you’re shopping for wang necklaces on a budget? Etsy has you covered! Right now there are over 400 options for “penis necklace” on the crafting website, many of them budget-friendly. Like this droopy one, which can be had for just $49.

Or how about a multi-colored one for just $26?

With so many options available, it’s never been a better time to be a penis jewelry enthusiast. Bottom line, if you can’t get your hands on a tiny schlong necklace made from precious metal, you only have yourself to blame.