This Bride Wore A T-Rex Costume To Pull A Hilarious ‘First Look’ Prank On Groom, And His Reaction Is Priceless 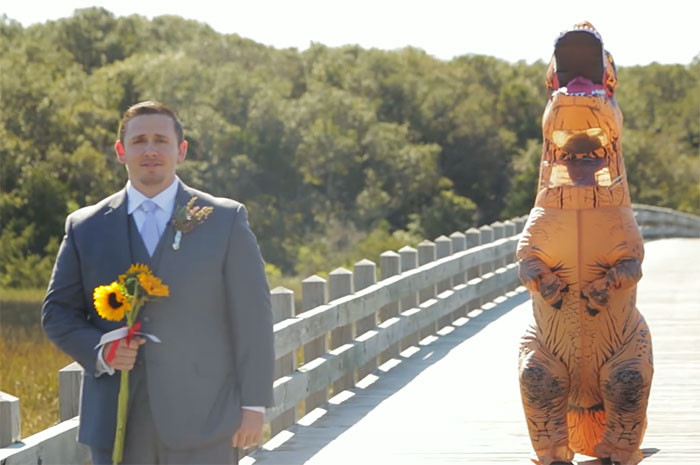 You know that “first look” moment at weddings? It’s the one where the soon-to-be-married couple sees each other all fancy-looking for the first time ever, and it’s considered a pretty big thing, as it’s usually filled with tears of joy and a bunch of pictures. Elizabeth Gardner imagined the “first look” moment a bit differently – filled with laughter instead of tears of joy.

The bride decided to show up in a T-Rex costume. She did so for two reasons – just to see the groom’s face when he first saw her at their wedding, and for a more personal one. “My mother’s maiden name, and my middle name, is Rex,” Elizabeth told The Huffington Post. “So, I thought it would be funny to wear the costume on the day I would go from a Rex/Hundley to a Gardner.” Jon Clark Weddings shared a video capturing the groom’s reaction at the wedding and it’s absolutely priceless! You can check it out below.