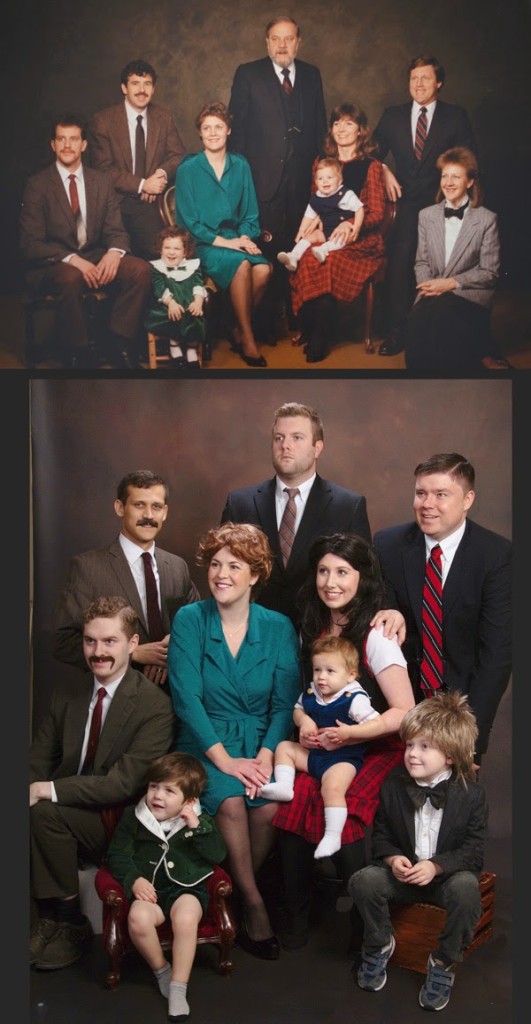 Let me travel back in time about 7 years for you. My Grandpa had passed away a year prior and I got to thinking about this hilariously amazing (and massive) family portrait that my Grandpa had in his basement. It was taken when I was 3 years old, just after my Grandmother passed away. Grandpa remarried several years later, but obviously his new wife wasn’t in the photo. So, Grandpa has been gone for a year or so and I get to thinking that maybe his wife isn’t too attached to the picture, which has been shoved in the basement where no one could see it for the last decade. I asked if I could have it and was denied. No big deal, I assumed she had a reason and moved on. Story over…… until Christmas 2013.

This is going to be a bit complicated, but try to follow along with me if you can. A few days after Christmas last year I receive a text from my cousin Brian. Brian is my cousin on my Dad’s side of the family, and the earlier mentioned family portrait is from my Mom’s side. Well I get this message and it’s a picture of Brian posing with the family portrait behind him. Brian is a realtor so my first thought is that Step-Grandma is selling her house and he’s there for a showing. Nope. It turns out (here’s where it gets crazy) Brian is at a Christmas party at his wife’s brother’s wife’s parent’s house in Glen Carbon, Illinois, which is about a half hour away from St. Louis where my family lives. This particular family has their basement decorated very kitschy. Think Applebees or TGIFriday’s. Apparently about a year prior their neighbors found this portrait at the local Goodwill store and bought it as a gag gift because it was so funny. Huge gaudy gold frame, velvet matting, and all. Yep, you read that right. The family portrait that I, as the oldest grandchild (and someone IN the photo), had asked for, was sitting at the Goodwill.

Sometimes I question what my exact beliefs are, but I’ll tell you the fact that over the course of 7 years that photo was denied, discarded, and then made it’s way back to me feels like fate. The current owners were incredibly kind and gave the portrait to Brian to return to me. They were sad to see the family go, but happy to know who the mystery family was. So now it’s travelled to Chicago where I’m displaying it with equal amounts of amusement and pride.

Our family found this story amazing and unbelievable at the same time. My cousin Maggie and I decided that we had to recreate the photo. Maggie got married this past weekend, and we realized that my two youngest kids were the perfect age to represent Baby Teddy & Toddler Caroline, and that with all of the cousins in town we’d have the perfect number of people to recreate the picture. So after some serious Ebaying, a few trips to the wig shop, and lots of planning we made our way to JCPenney Portrait Studio for the best family photo session ever.

So I now introduce to you the Steinmeyer Family circa 1984, and the new generation 2014. Exactly 30 years later we had the greatest bonding day ever, and I’m pretty sure Grandpa was smiling down on us hysterically laughing.”

(submitted by Caroline via Keep Calm & Carey On)