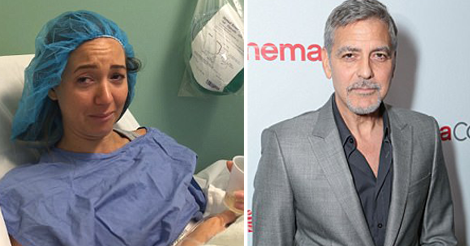 Painkiller-induced ramblings after surgery have been a wellspring of viral videos for years, but this one is even more surreal than usual.

Emily Young was filming her stepsister Kayleigh while Kayleigh was recovering from an in-vitro fertilization procedure. Still woozy from the pain meds, Kayleigh gave a shoutout to someone unexpected: George Clooney. Kayleigh insisted that not only did the Batman & Robin star appear during her treatment, he personally carried it out.

“George Clooney did my retrieval, and he got 25 eggs,” she says in the video.

Over the course of the video Kayleigh runs quite the emotional gamut, from disbelief that the hospital could book the busy actor, to mortification that he “saw [her] vagina.” Which is understandable. One of my biggest fears is that a celebrity would see my privates.

But overall, Kayleigh thinks George’s appearance is a sign of good luck for her fertilization prospects. “Because it was George, I just feel like it might work,” she explains. Hear, hear.

Watch the video below: