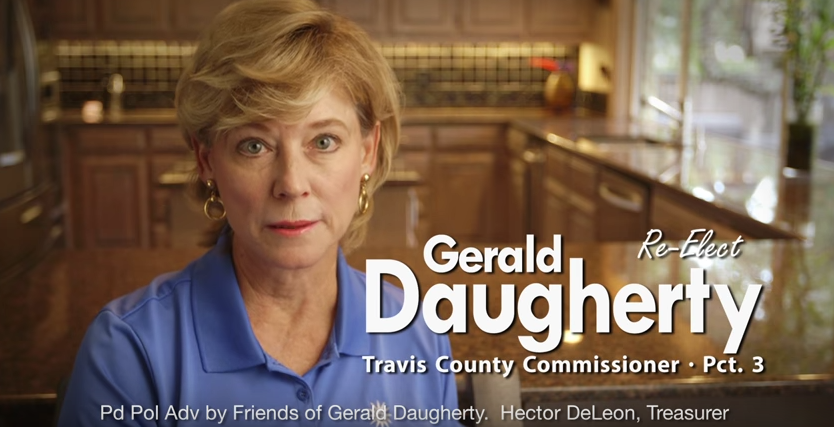 Campaign season is always a challenge for politicians’ families. But for Charlyn Daugherty, wife of Travis County Commissioner-hopeful Gerald Daugherty, the toughest part is when her husband regales her with the minutia of problems in his district.

On Monday, Gerald’s campaign released an ad that shows his devotion his constituents, and also what it’s like to be his spouse. Charlyn’s case for her husband is simple: a win for Gerald means getting him out of the house. “[He] doesn’t really have any hobbies,” she explains.

The video begins with Gerald telling Charlyn how expensive it is to operate prisons. Charlyn gives the camera some side-eye worthy of The Office:

Not just Charlyn is subjected to it. When the Daughertys host another couple for dinner, Gerald corners a friend to discuss the tax rate. The ad shows the friend listening, and probably regretting he accepted the invitation.

Later, while Gerald tells a gripping yarn about an 18-wheeler’s emissions, Charlyn deploys the full eye-roll:

Her final message to the voters is simple, direct, and desperate.

If Gerald is re-elected in a couple weeks, he and Charlyn will both be winners.